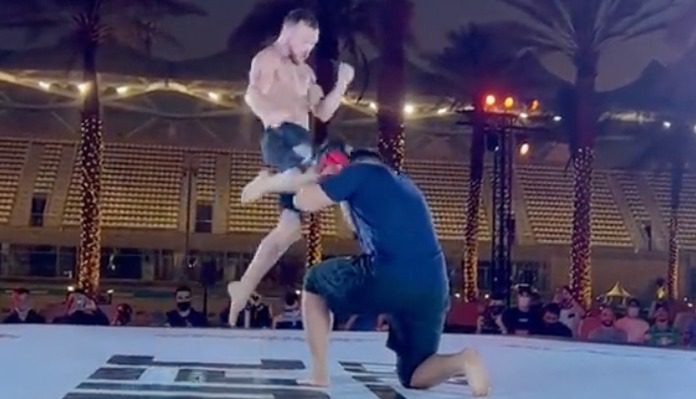 In the co-main event of UFC 267 in Abu Dhabi, Yan was supposed to rematch Sterling for the bantamweight title, yet he will now face Cory Sandhagen for the interim title. They fought back in March where Yan landed an illegal knee and was DQ’d leaving Sterling to become the new champion. With that, at open workouts, Yan faked the illegal knee, which was a shot at Sterling.

After Yan lands the knee, he throws his hands up in celebration as a joke, which got the crowd excited. It was a funny moment from his open workout and to no surprise, Sterling blasted Yan on social media.

Petr Yan, of course, is fighting Sandhagen for the interim bantamweight title on Saturday at UFC 267. The winner will face the champion next, but the Russian told BJPENN.com ahead of this fight he doubts Sterling will fight him again.

“I wasn’t surprised, you could see it coming for a while. This guy doesn’t want to fight me again,” Yan said to BJPENN.com. “I don’t care about Sterling, my goal is to get the belt back. I’m not gonna wait for someone who doesn’t want to fight me… I’m not thinking about him until he grows the balls to enter the Octagon with me again.”

Before the loss to Sterling, Yan was undefeated in the UFC and won the vacant title last July with a TKO win over Jose Aldo. He also knocked out Urijah Faber and beat Jimmie Rivera, and John Dodson among others during his rise up the ranks. If he can get past Sandhagen, a rematch against Sterling would be a massive fight due to all the history the two have.

What do you make of Petr Yan trolling Aljamain Sterling?