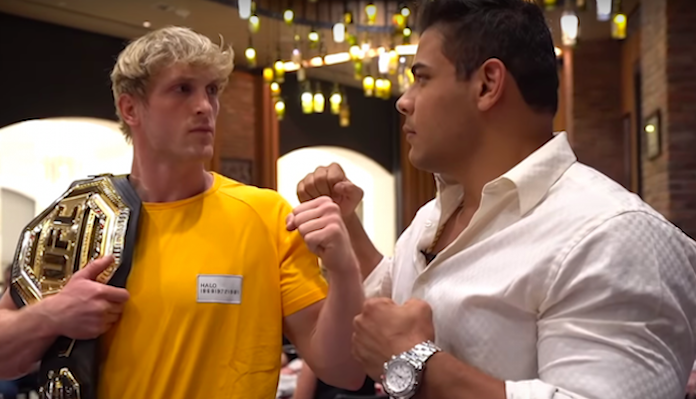 During this session, which included some wrestling and some boxing, Costa ultimately sent Paul careening to the canvas with a punch — though not everybody believes the knockdown was legit.

Costa opened up on this sparring session with Paul in an interview with The Schmo one day after the fact. The Brazilian knockout artist praised Paul’s toughness and talent, and also snuck in a dig at middleweight champ Israel Adesanya for his lackluster victory over Yoel Romero last weekend.

“I did boxing sparring last morning with Logan Paul,” Costa said, pointing out a fat lip he sustained in the sparring session with the YouTuber. “Logan Paul is a tough guy. He make my lip a little hurt. I’m a tough guy but he [is] also. We did a boxing spar without mouthpieces, mouth guards. We are tough guys. We’re not afraid to take some hits like Adesanya [is]. He’s scared. He avoided the fight [with Romero]. Me, no. Logan Paul not avoid fight.”

The Schmo then asked Costa if he believes Logan Paul could fight in the UFC. Costa believes its possible if Paul commits to his training.

“I think he can if he wants,” he said. “If he starts training and he’s serious about doing this, he can, because he’s talented.”

Logan Paul, for those unaware, is now 0-1 as a pro boxer, and also has some wrestling experience, so he’s not completely out of his depth in terms of combat sports experience.

Paulo Costa, meanwhile, is awaiting a title shot against Adesanya, having recently recovered from a bicep injury. The Brazilian is 13-0 as a pro, with his most recent win coming against Yoel Romero last summer.

What do you think of these comments from Paulo Costa? Could Logan Paul be UFC bound?