Costa is the No. 1 contender in the UFC middleweight division and earned a title shot following his unanimous decision win over Yoel Romero at UFC 241. Unfortunately for Costa, he injured his biceps and had to have surgery on his arm, which is expected to keep him out of commission until mid-2020.

Now Costa has gone after Adesanya on social media, unleashing a tirade with racist connotations. Check out the message Costa sent to Adesanya on Twitter, which has already been deleted, below: 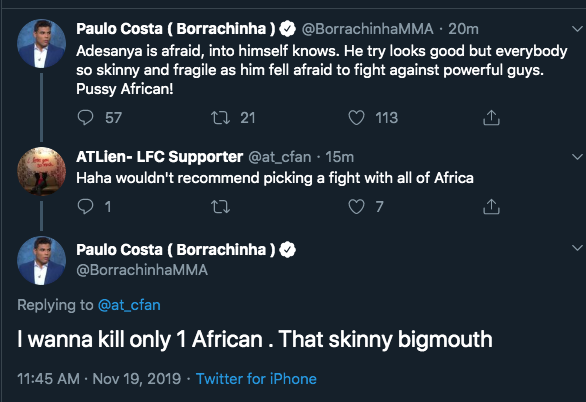 “Adesanya is afraid, into himself knows. He try looks good but everybody so skinny and fragile as him fell afraid to fight against powerful guys. P***y African!”

Fans who saw the tweet were quick to jump in and criticize Costa for his poor choice of words. But the Brazilian double down on his comments, writing the following statement on Twitter that is sure to generate plenty of negative backlash.

“I wanna kill only 1 African . That skinny bigmouth”

These negative comments towards African fighters is sure to draw the ire of Adesanya as well as other fighters from that continent on the UFC roster. Don’t be surprised if Costa eventually realizes what he wrote is wrong and if he eventually deletes the tweets it wouldn’t be a shocker.

Costa is obviously quite frustrated that he is injured and sitting on the sidelines while the man he beat, Romero, is likely going to be next in line to fight Adesanya in the meantime. But taking to social media to post vile comments such as these is only going to draw criticism from fans, media, and his fellow fighters.

Do you think Paulo Costa will be reprimanded by the UFC for his comments towards Israel Adesanya?