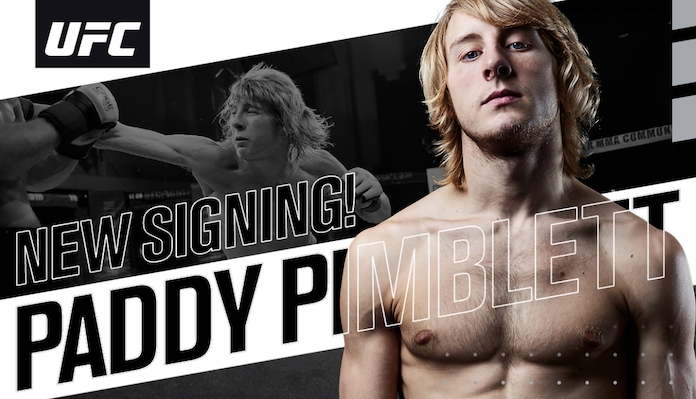 Pimblett first appeared on the UFC fan rankings last week, which hinted that he could be signing with the promotion soon. Sure enough, the UFC has inked the former Cage Warriors star to a new deal. On Monday, the UFC officially announced on its social media pages that Pimblett has signed a contract to fight in the Octagon. Check it out below.

Cage Warriors?! Completed it, mate! Welcome to the UFC @PaddyTheBaddy!

Cage Warriors gave Pimblett the opportunity to sign with the UFC and congratulated their former featherweight champion with a message posted on the CWFC social media channels.

Breaking: @PaddyTheBaddy has signed for the UFC! Everyone here at Cage Warriors wishes Paddy all the best in the UFC #UFCPaddy

Pimblett (16-3) is nicknamed “The Baddy” and he hails from Liverpool, England. The 26-year-old Brit has been a professional mixed martial artist since 2012, and not long after that, he made his debut in Cage Warriors. From 2013 to 2021, Pimbeltt starred in CWFC and went 11-3 overall in the promotion over the years. In 2016, Pimblett defeated Johnny Frachey via first-round TKO to capture the vacant CWFC featherweight title. A few months later, he defended the belt successfully against current UFC fighter Julian Erosa. However, Pimblett would lose the belt in his next title defense when he lost to Nad Narimani.

After the loss to Narimani, Pimblett took a year off and when he returned, he came back as a lightweight. Since fighting at 155lbs, Pimblett has gone 3-1 overall and he is coming off of back-to-back first-round wins over Davide Martinez and Decky Dalton in his last two fights. Those two wins were apparently enough to finally get him the call from the UFC.

How excited are you to see Paddy Pimblett in the UFC and who do you want to see him fight in his Octagon debut?