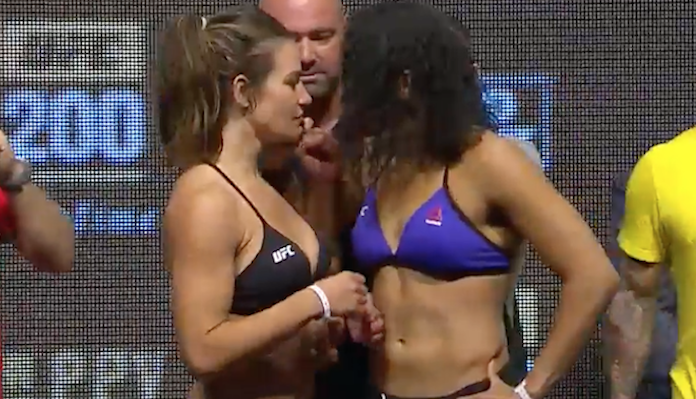 After more than a decade of dominance, UFC women’s featherweight champion Cris Cyborg’s reign came to a shocking end at UFC 232, when she was knocked out by reigning UFC women’s bantamweight champ Amanda Nunes in just over a minute.

In the opinion of former UFC women’s bantamweight champion Miesha Tate, Cyborg’s shocking loss to Amanda Nunes can be attributed to the fact that she didn’t stick to her strategy. That being said, Tate feels Cyborg has never really needed a strategy before, so she can’t exactly be faulted for that mistake.

“I said, if she lands that right hand – if Cyborg doesn’t respect the fact that Amanda has enough power to knock her out, she’s going to be in trouble,” Tate recently told MMAjunkie Radio. “I was like, ‘Cyborg needs a strategy.’ She’s never needed a strategy in a fight [before].”

Miesha Tate, of course, has fought Amanda Nunes previously. In fact, Tate was the woman Nunes defeated to win the UFC bantamweight straight.

Having been in there with Nunes, Miesha Tate understands just how dangerous the champion is, and how crucial a good strategy is when fighting her.

“Her simple jab feels like a right hand, and then her right hand feels like you got hit by a truck,” Tate said. “I didn’t even know where I was half of that fight.”

“It’s not even in the same league,” Tate said. “Amanda hits way harder.”

Nunes is so powerful that Tate feels she might even be able to hang as a professional boxer.

“I think she’d be knocking girls out, for sure,” Tate said.