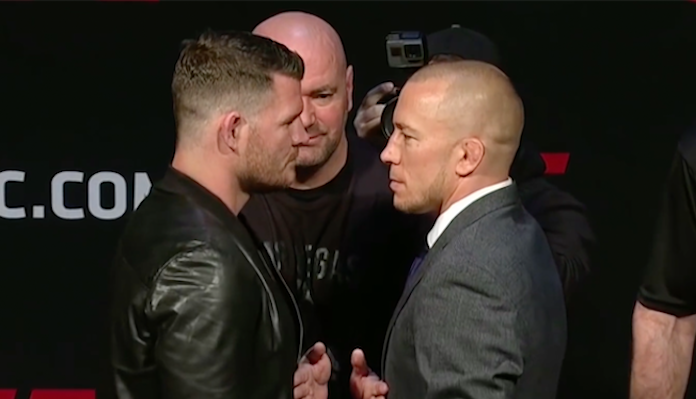 Michael Bisping had plenty to say about Canadian MMA legend Georges St-Pierre before their 2017 middleweight title fight, but now that St-Pierre has retired, Bisping has nothing but high praise for him.

Speaking on his Believe You Me podcast, Michael Bisping explained that his pre-fight trash talk of St-Pierre was only a means of hyping up their fight, and applauded the Canadian for his approach to the game.

In fact, Bisping believes all young fighters should look to follow in the footsteps of the man we call GSP.

“I just want to say, listen, Georges St-Pierre, absolute legend of the sport,” Bisping said (transcript via MMA Fighting). “Absolute legend. God bless and good luck in everything that you do from here on out. I always said that Georges St-Pierre was the person that a young fighter should model themselves after. They really should. Always strive to learn new training methods. Training smart, fight smart, professional in and out of the cage.

“Of course I talked a ton of sh*t leading up to the fight because that’s what you’ve got to do to make it interesting,” Bisping continued. “But I had a lot of respect for GSP. That’s not to say I fabricated everything. I meant what I was saying to him at the time. We’re gonna fight, he thinks he can beat me? I take that personally.”

Michael Bisping is also recently retired from MMA competition. The British legend hung up the gloves after a knockout loss to Kelvin Gastelum, citing a litany of lingering injuries as his reason.

Speaking on his show, he joked that these injuries were the reason St-Pierre was able to beat him.

“Had I not had a bad eye and broken ribs, I would’ve beat you. So you got lucky Georges,” Bisping joked. “Bum knee, bum ribs, bum eye, my wrist, I mean Jesus Christ it’s amazing that I made it to the octagon. Not to take anything away from Georges because that’s not what I’m trying to do here. These are just facts.”

Are you with Michael Bisping on this one? Is GSP the man young fighters should strive to emulate?