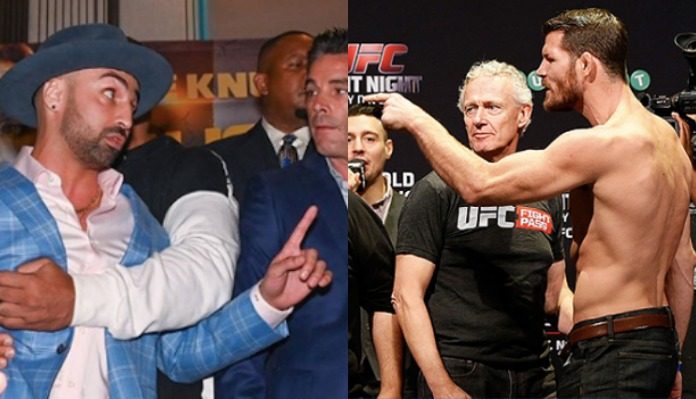 Speaking at the BKFC 6 press conference on Monday, former boxer Paulie Malignaggi made quite a few comments that rubbed the MMA community the wrong way. Some of his comments actually targeted the MMA community point blank. Yet the thing that bothered former UFC middleweight champ Michael Bisping the most was Malignaggi’s fashion choices — namely his fedora.

“Don’t get me started on [Paulie Malignaggi] spitting on [Artem Lobov],” Michael Bisping said on his Believe You Me podcast (transcript via MMA News). “Any motherf*cker that shows up wearing a hat like that deserves to die. It’s as simple as that. I’m sorry. You look like an absolute tit. He looks like a villain out of the Dick Tracy movie. You know what I mean? He might as well have had a pinstripe suit on, that big stupid gangsta hat. Oh my god, it did not look good.

“I’m sorry, maybe I don’t get it. Maybe I’m not Italian from Brooklyn, or whatever the f*ck you say Paulie,” Bisping continued. Maybe that’s their thing, but I’m telling you, you look like a tw*t. And any man that runs around, I don’t care if you’re at the beach, I don’t care if you’re, whatever past time you are taking part in. If you go out wearing a fedora, you are a c*ck. Plain and simple.”

According to MMA News, Michael Bisping went on to give Paulie Malignaggi and Artem Lobov props for creating mass interest in their BKFC 6 fight, which will go down in Tampa, Florida on June 22.

Michael Bisping retired from MMA earlier this year, and will soon be inducted into the UFC Hall of Fame. In addition to his work as a podcaster, he also works as a commentator for the UFC.