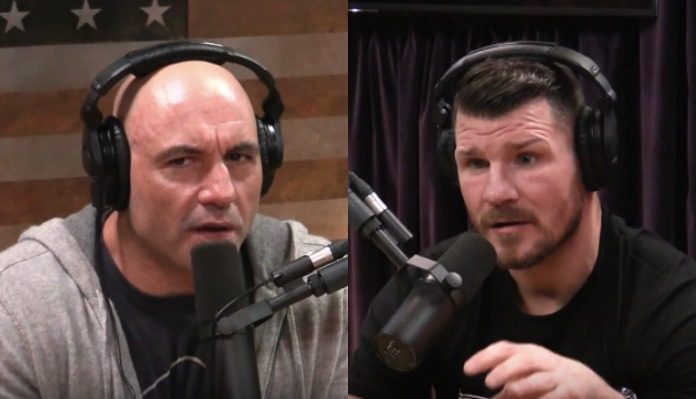 Former UFC middleweight champion Michael Bisping had a long and illustrious fighting career before he finally hung up the gloves in early 2018. Given his many accomplishments, you might expect him to have a difficult time pinning down the most satisfying moment of his career. Yet when he was asked to name his most satisfying win by UFC color commentator Joe Rogan on the JRE MMA show, Bisping was able to produce an answer quite quickly.

His pick? Anderson Silva, who he defeated by unanimous decision after a frenzied, five-round war in early 2016.

“Other than winning the belt, and winning The Ultimate Fighter, I’m sure, what was your most satisfying victory? Was it Cung Le?” Rogan asked.

“My most satisfying victory… My word,” Bisping began, thinking for a moment. “Anderson Silva. That was a big one for me.”

Joe Rogan promptly agreed with Michael Bisping, recalling the controversial knee Silva landed in the waning moments of the third round, as Bisping attempted to retrieve his mouth piece.

“That was a big one because of the cheap knee,” Rogan said.

“It was cheap, I’m glad you said that,” Bisping responded.

Michael Bisping went on to explain why he chose that particular moment to attempt to collect his mouthpiece — which created the opening for Silva’s thunderous knee.

“Well I know the rules,” he said. “I know there has to be a lull in the action for the referee to step in. I’m backing up, and we’re not engaging in blows, to me that’s a lull in the action. So I take that moment to point down over here and say ‘my mouth piece’ and as I’m doing that, he throws a beautiful knee — it was beautiful, it really was — and good for him. I don’t hold it against the guy.”

Despite taking a rocket-fuelled knee right to the chin, Michael Bisping was able to rally and continued to take the fight to Silva in the fourth round.

“It wasn’t f***ing easy I’ll tell you that much,” Bisping responded with a laugh. “That took every part of my will to continue.”

“Of course, beating Rockhold and winning the belt, nothing tops that, but the Anderson one, because of that [knee] it just made the storyline so much better,” Bisping continued. “To fight through that adversity, to dig deep…”

Bisping also addressed the naysayers who feel he met Anderson Silva when the Brazilian legend was far removed from his competitive prime.