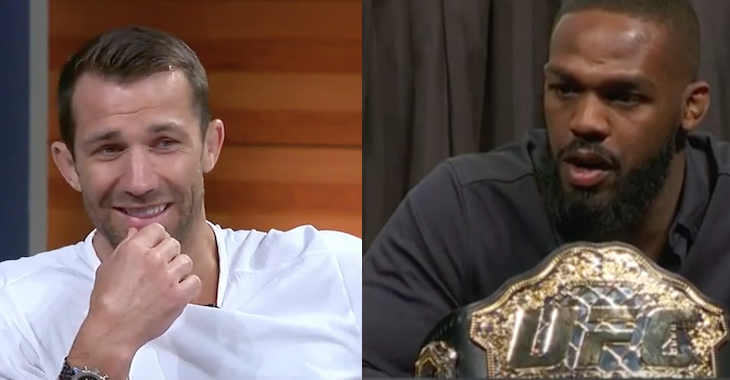 Rockhold recently spoke with TMZ Sports where he revealed that his decision to move up to light heavyweight spawned from a desire to “get after” Jon Jones.

“I’m moving up to get after him,” Rockhold stated. “That’s what I’m here for.”

Luke Rockhold has been battling injuries over the past two years but believes his upcoming move to 205-pounds will help prolong his career.

“The last couple years, I’ve been compromising myself so much to get down to ’85, and my body just falls apart in training camp the last few weeks,” Rockhold said. “Being 205 just feels right. I feel healthy. I feel comfortable, and I’m excited to take down these light heavyweights. I just don’t see a lot there.”

Rockhold was last seen in action at UFC 221 in February of 2018, where he suffered a third-round knockout loss to Yoel Romero.

Prior to that, the former UFC and Strikeforce champion was coming off a stoppage win over David Branch.

While his eventual goal may be a title shot at Jon Jones, Luke Rockhold knows he has to earn it first.

Jon Jones most recently competed at last month’s UFC 232 in Los Angeles where he scored a third-round knockout victory over Alexander Gustafsson to capture the promotions vacant light heavyweight title.

“I thought he looked beatable,” Rockhold said. “He’s good on the feet. He’s tactical. He adjusts, and he fights to his advantages. I like my advantages vs. his.”

The former middleweight champion, Rockhold, finished by sending a message to Jon Jones.