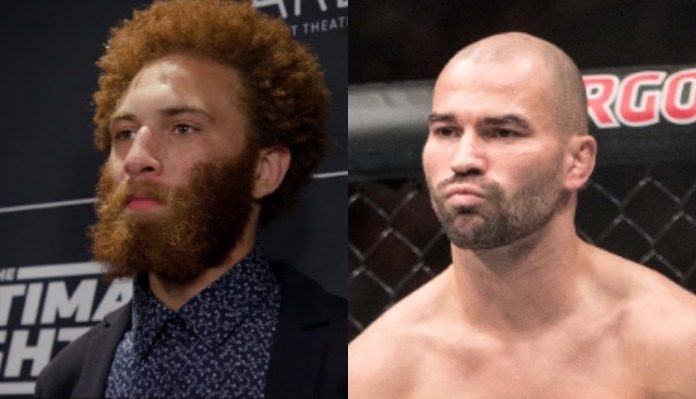 At UFC Denver this past Saturday, we got a clash between season 27 of The Ultimate Fighter contestants. One of which was the lightweight winner, Mike Trizano.

Standing across from him was one of the season’s fighters with the most obvious potential, “Violent Bob Ross” Luis Pena.

Unfortunately for Pena, he would suffer a broken foot after winning his opening round bout on the show thus resulting in him being removed from the tournament bracket. If Pena would have been able to continue, he and Trizano would have met in his next fight in the semi-finals.

In the end, the two still wound up getting to face off and it would be Trizano who walked away with the W on Saturday night by a close and competitive split decision. The loss was Pena’s first of his six-fight career.

Already considering the move prior to this bout, the 6’3″ Pena has now confirmed (via Ariel Helwani) that he will be dropping down to the featherweight division for his next fight.

The American Kickboxing Academy (AKA) product already has a name in mind for who he wants to debut against too. That being none other than SBG staple, “The Russian Hammer” Artem Lobov.

As an AKA member, Pena is teammates with UFC featherweight Zubaira Tukhugov who was supposed to face Lobov at UFC Moncton at the end of October. However, due to Tukhugov’s involvement in the UFC 229 post-fight brawl, he was pulled from the fight and his current status within the promotion is in a bit of a limbo of sorts.

Because of all the drama between the camps and more specifically Tukhugov and Lobov along with their teammates Khabib Nurmagomedov and Conor McGregor, Pena hopes to be able to get his hands on Lobov in the case that Tukhugov cannot.

Lobov would end up losing his last bout at UFC Moncton by unanimous decision against the late replacement, Michael Johnson. It was his third loss in a row, making him 2-5 within the promotion.