UFC star Khamzat Chimaev got into a physical altercation with members of Team Makhachev following the conclusion of UFC 280.

Makhachev (23-1 MMA) collided with former lightweight champion Charles Oliveira (33-9 MMA) in the headliner of today’s pay-per-view event in Abu Dhabi with the promotions coveted 155lbs title up for grabs.

Oliveira was looking to reclaim the UFC’s lightweight title when he took to the Octagon this afternoon. ‘Do Bronx’ was most previously seen in action at May’s UFC 274 event, where he extended his win streak to eleven in a row with a first-round submission victory over Justin Gaethje (see that here).

Tonight’s UFC 280 main event resulted in a coming out party for Makhachev. The Russian standout was able to hurt Charles Oliveira in the standup on two occasions, the second of which resulted in ‘Do Bronx’ dropping to the canvas in round two. From there, Islam would secure a head and arm choke which forced ‘Do Bronx’ to tapout. Check out the unbelievable finish here. 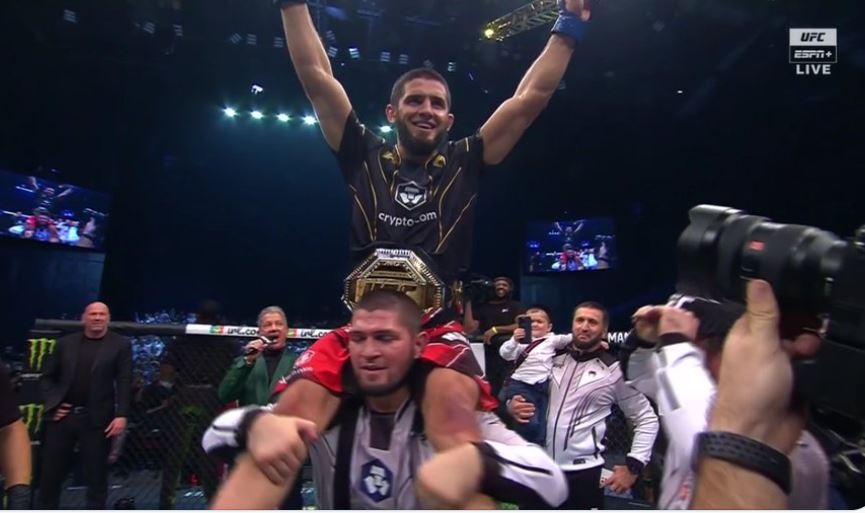 Immediately following the conclusion of today’s headliner, Khamzat Chimaev was seen getting into a physical altercation with members of Team Makhachev along the outside of the Octagon.

Details of what started the altercation remain scarce at this time, but it is clear that ‘Borz’ was not happy with about what transpired following Islam’s title-earning win.

Check out the footage of the altercation below:

Khamzat Chimaev got into it with Team Makhachev following the #UFC280 main event 😳pic.twitter.com/Uf0WDhqnqa

Khamzat Chimaev is currently linked to a bout with Colby Covington but nothing has been made official as of this time.

What do you think spawned the altercation between ‘Borz’ and members of Team Makhachev at UFC 280 in Abu Dhabi? Share your thoughts in the comment section PENN Nation!