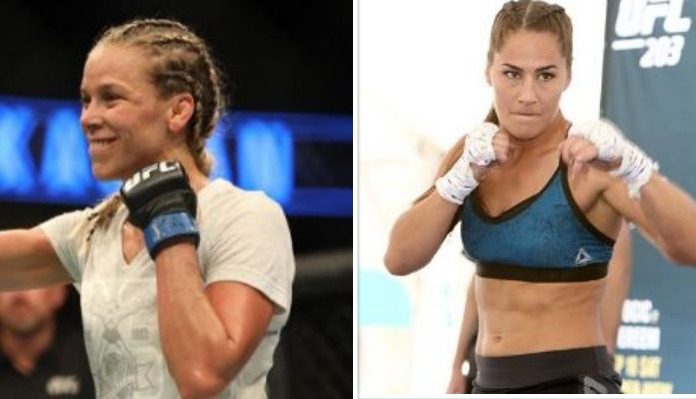 In the craziness that was finding UFC 230’s main event, fighters were moved around and shifted thus leaving some without fights.

One of those fighters being Jessica “Evil” Eye (13-6) who was originally booked to face off with Sijara Eubanks at UFC 232 before all the shiftings happened.

Eubanks would be pulled to face off with Valentina Shevchenko in the new vacant flyweight title main event for UFC 230 only for things to change a week later and Shevchenko had her original bout with Joanna Jedrzejczyk rebooked for UFC 231 on December 8.

Which is now where Eye will land.

ESPN confirms that Eye will be taking on the No. 3 ranked flyweight contender Katlyn Chookagian (11-1) in the Toronto, Ontario, Canada UFC return.

Chookagian was set to be the fighter on standby in the case of either Shevchenko or Eubanks not being able to make it to the fight. Now with this fight made, if anything happens with Shevchenko or Jedrzejczyk, the UFC will have two options ready.

The 29-year old “Blonde Fighter” Chookagian has been nearly perfect in her 12 fight career as her only blemish came at bantamweight against one-time title challenger Liz Carmouche. Since then Chookagian has won three straight over the likes of Alexis Davis, Mara Romero Borella, and Irene Aldana.

Eye, on the other hand, has also picked up some much-needed momentum after a very rough start to her UFC career. She currently rides a two-fight winning streak with wins over Kalindra Faria and Jessica-Rose Clark. A win for either woman could push them to become the next No. 1 contender.

As for the rest of the card, it currently looks as follows: