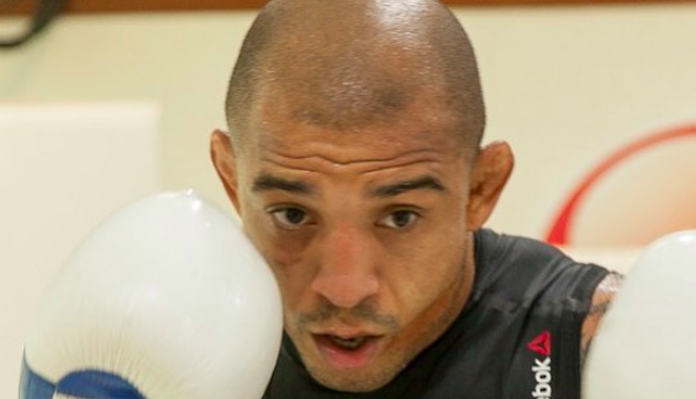 UFC 237 is set to go down on May 11 in Rio de Janeiro, Brazil. In the evening’s co-main event, legendary featherweight icon, Jose Aldo looks to take out another rising contender in Australia’s Alexander Volkanovski.

Unfortunately for Aldo, his fight is now up in the air after suffering a bacterial infection from a cut last week that resulted in his hospitalization.

On Thursday the former 145-pound king shared an update on his current status.

“I was training wrestling last week and I went in for a double leg takedown and I kinda burned my knee on the mats,” Aldo told MMA Fighting. “And that got infected so I went to the hospital and my knee was pretty swollen. Once I went in there they just kept me in the hospital.

“Because when I got to the hospital I was only supposed to be there for a night and then the antibiotics they gave me didn’t work. So they waited another two days until they switched the antibiotics which started to work. Obviously, I thought about not being able to fight and I still can’t say that I’m going to fight because I need to go to the doctor and get re-evaluated. But we’re doing everything we can and hopefully, I’ll get healed up.”

Along with Aldo’s bout at UFC 237 will be a big strawweight title fight that will see the champion, Rose Namajunas head into enemy territory to defend against the ever-dangerous, Jessica ‘Bate Estaca’ Andrade.

The card will also feature another fellow Brazilian icon to Aldo in the former middleweight king, Anderson Silva as he faces the surging new divisional threat, Jared Cannonier.

Stay tuned to BJPenn.com for all the latest updates surrounding the event which goes down on May 11 on pay-per-view. Learn how to watch UFC 237 here