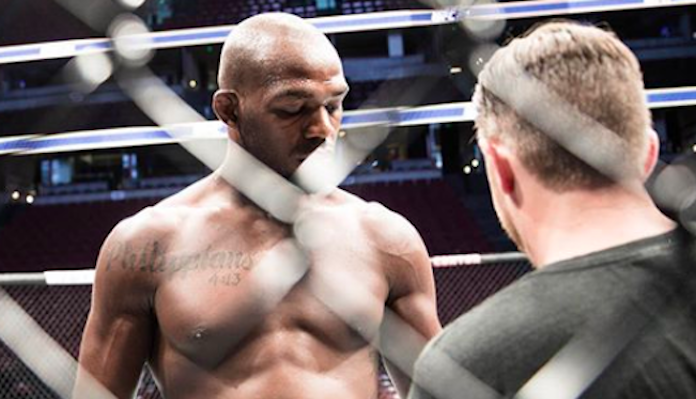 Jon Jones striking coach Mike Winkeljohn has been on the receiving end of some harsh criticisms as of late.

Most recently the veteran head coach, who will corner Jon Jones at UFC 232, was put under scrutiny by gym president Ricky Kottenstette and fellow coach Frank Lester.

In text messages that were recently revealed on Instagram, Kottenstette and Lester discussed their personal issues with “bully” Mike Winkeljohn.

“I tried my best to stay silent for a long time but this is the new culture everyone that chooses to be a part of the new gym (Winks) deals with. #Loyalty has been forgotten in place of #Greed. This is a conversation from one of their coaches who basically spells out the dictatorship in place. #CowboyKnows #UFCDenver #UFC #Loyalty #Respect #AntiBullying #DontBeScared” – Ricky Kottenstette

Mike Winkeljohn, who will train Jon Jones for his UFC 232 rematch with Alexander Gustafsson, responded to the comments in a recent interview with Submission Radio.

“The bully thing caught me off guard, but there’s no doubt I understand that Ricky wouldn’t like me. Hey, you know what, guess what? I do not like the guy,” Winkeljohn told Submission Radio. “Let me think about this for a second. He ran three schools for Greg Jackson for a while, they all lost money. In fact, our big gym was losing money and was considered the best gym in the world and it was actually draining Greg Jackson’s other resources, but for some reason the manager was driving very, very nice exotic cars and living in a very nice home.

“Something was weird about that. So when Greg came to me and said, ‘look, this place is failing, I’m gonna have to close the doors,’ I said, ‘I got an idea, I’m just not taking that guy with me,’ and that being Ricky Kottenstette. So he’s no longer out of our gym. And there’s some people that are unhappy with me I guess. I guess that I’m a jerk in that I expect people to show up on time, work hard and not steal.”

“What’s funny is that I don’t even look at the internet, so I don’t even know what’s going on. People come tell me, they come running to me to tell me, but I could care less,” he said. “I see it as we’re very successful, people want to take us down, they’re jealous of our success. And so I expect more and more of it to come in the future. I’m doing great, man. I love my job, I’m going to go in now and work with Jon Jones. I’m real excited about the future and I’m so glad I’m not doing anything else for a living.”

What do you think of the response from Jon Jones striking coach Mike Winkeljohn? Sound off PENN Nation!