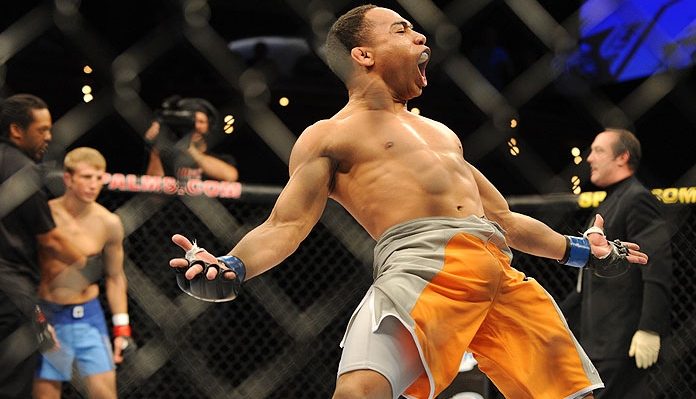 A great question for any MMA trivia quiz would be; ‘Who handed TJ Dillashaw his first career defeat?’ If you answered with John Dodson, that would be correct.

Cast members on season 14 of The Ultimate Fighter in 2011, Dodson represented Team Mayhem while Dillashaw was on Team Bisping.

Meeting in the bantamweight finals, Dodson would only need a little under two minutes to score the TKO victory over the future two-time UFC champion.

Six years, a change in weight class, and a pair of title shots later and Dodson would find himself squaring off with former World Series of Fighting king, Marlon Moraes who was still fairly new to the promotion.

In a close bout, it would be Moraes who would take home the split decision nod for his first official UFC win. A win that Dodson doesn’t quite believe went to the right man.

Now with both Dillashaw and Moraes inevitably set to square off at some point, Dodson has his eyes firmly placed on both men.

“I’m going to beat up TJ, make him move down [in divisions], and then go ahead and beat up Marlon because Marlon is the one running his mouth saying he doesn’t want to fight TJ because he lost to a little boy,” Dodson told MMAjunkie. “But in retrospect, Marlon didn’t beat me. I dropped him in the first round and took him down through the whole fight. He knows as well as I do.”

Having gone 3-3 since his return to bantamweight in 2016, John Dodson is now looking to rebound off a loss to Jimmie Rivera when he faces the red-hot Russian prospect, Petr Yan this morning at UFC Prague.

Dodson has never lost back to back fights in his 30 fight career as he’s always either alternated results or been able to string together solid winning streaks following a setback.