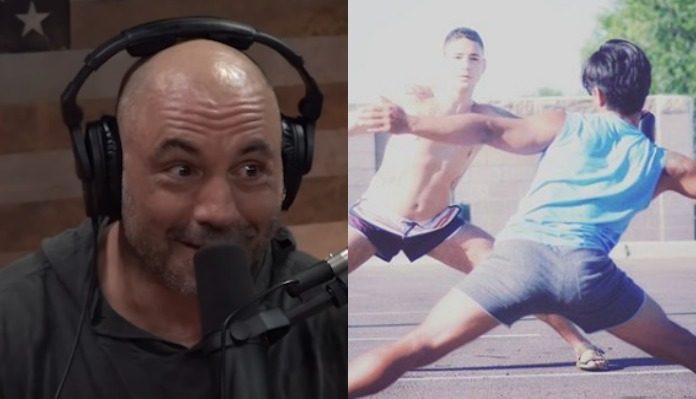 The most recent fighter to take the Joe Rogan hot seat is none other than bantamweight contender Aljamain Sterling.

The 25-year-old sat down on the Joe Rogan podcast to discuss a range of topics including Diego Sanchez’s recent loss against Michael Chiesa. Rogan and the “Funk Master” criticized Diego Sanchez for picking a new ‘self-awareness coach’ named Josh Fabia to serve as his cornerman in the fight.

“He had that one guy in his corner telling him ‘be like Tyson’. He was giving him weird advice,” Rogan said.

“This dude has no experience in MMA coaching by the way….(but) Diego is such a strange guy, he might believe this dude has magic powers. A big part of Diego’s success is his belief system. Diego just believes things.”

Despite being a great believer in the use of positive thought and spirituality, it wasn’t enough to protect “The Nightmare” from a unanimous loss against Chiesa at UFC 239 last weekend.

Rogan and Sterling managed to pull up an online clip of Sanchez’s new coach and both make sarcastic digs at his training style.

Prior to the fight, Diego Sanchez left his previous training home Jackson-Wink MMA,  because he felt his training wasn’t being prioritized. He has replaced his former team with this self-awareness expert who takes a left-field approach to training. As far as Joe Rogan is aware, Sanchez didn’t even have training partners in the lead up to UFC 239.

During their critique of Sanchez and Fabia, both Rogan and Sterling credited Michael Chiesa for the skills he displayed in the Octagon.

“The way he was flowing with Diego. He didn’t tighten up, he was in total control…it was like a black belt rolling with a blue belt. It was crazy to watch,” Rogan said.

What’re your thoughts on Sanchez’s new cornerman and his performance at UFC 239? Let us know below.