UFC color commentator Joe Rogan believes former Bellator and ONE Championship title holder Ben Askren will be giving a lot of fighters problems in the UFC.

Askren (18-0 MMA) was recently dealt from ONE Championship to the UFC in return for former flyweight kingpin Demetrious Johnson.

The historic trade, which could change the world of MMA as we know it, sent shockwaves throughout the mixed martial arts community.

While a plethora of different welterweights took to social media in order to challenge the newest member of the UFC roster, UFC commentator Joe Rogan recently warned fighters to be careful what they wish for. 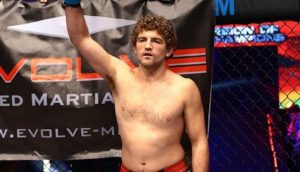 “Everybody’s in trouble,” Joe Rogan stated. “There’s a lot of mother**kers in trouble if Ben Askren gets a hold of you. You’re like ‘why can’t I get up?’”

The long time UFC commentator, Joe Rogan, is very excited about Ben Askren’s pending octagon debut and believes that “Funky’s” high level grappling skills will cause a lot of problems for his fellow UFC welterweights.

“There’s a reason why he’s undefeated and he hasn’t been hit in several fights,” Rogan said about Askren. “I had him on the podcast because I wanted to let people know about him. I’ve been a big fan of Ben Askren’s from back when he was a Bellator champion. If you watch his fights in Bellator against [Andrey] Koreshkov and [Douglas] Lima, Lima’s a beast and he just dominated him. Lima f*cks people up! Lima’s a dangerous. A dangerous cat and Ben Askren was like ‘whoops you’re on your back again, you can’t get up and you’re taking punches.’ It’s just a different caliber of wrestling.”

“I’ve said it many, many times… The most important skill for MMA. It’s wrestling,” Rogan stated. “It dictates where the fight takes place. If you want to stand up, the guy can’t take you down. Chuck Liddell style, and if you want to go to the ground, you’re the one who gets to dictate where the fight takes place. If you’re the superior wrestler, it’s the best base for MMA. I really believe that.”

Ben Askren is hoping to make his highly anticipated octagon debut in early 2019.

Who would you like to see Ben Askren fight first under the UFC banner? Sound off PENN Nation!