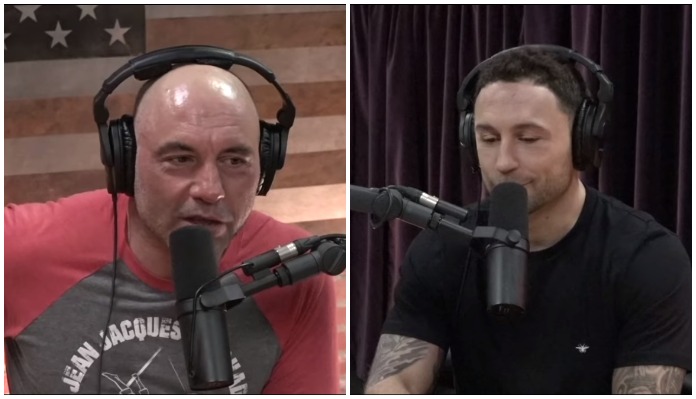 UFC color commentator Joe Rogan and Frankie Edgar wonder if Conor McGregor is attempting to clean up his image.

McGregor is widely recognized as the biggest star in MMA but he’s had his share of controversies and run-ins with the law. More recently, McGregor was under fire for punching a bar patron inside a pub in Ireland. The “Notorious” one is also reportedly under investigation for two sexual assault allegations.

On an edition of his JRE MMA Show, Rogan had Edgar on as a guest and the two discussed whether or not McGregor is trying to turn things around.

“How about Conor?” Frankie Edgar started. “He’s kind of made a 180-type flip on his personality. He’s still funny, he’s still mouthy and stuff but it seems like he’s trying to clean his image up a little bit.”

When Rogan pointed out the possibility that McGregor’s kindness was just for the Cerrone bout, Edgar said he feels it goes deeper than that.

“Maybe it was Cowboy,” Frankie Edgar responded. “Cowboy’s kind of easy to get along with and whatnot. Or maybe it’s just that he’s been dealing with so much. Well, Khabib and hitting the old guy and the sh*t that he’s dealing with over there. That Proper 12 he’s gotta tow the line a little bit.”

Rogan went on to share his viewpoint that McGregor felt he didn’t have to amp up the trash talk against “Cowboy.”

“I wonder but I also think, I don’t think he felt like he needed psychological warfare with Cowboy,” Joe Rogan said. “I feel like he thought from the beginning that he had a giant advantage over Cowboy. If you go back to an old press conference they were talking back and sh*t to each other. ‘You’re stiff as a board. I’ll f*cking break you in half.’ I think he just felt like this fight, ‘look I can just be a nice guy with this guy.’ But with Khabib, I think he felt like he had to f*ck with him. I feel like he felt that he had to get Khabib emotional the same way he got Aldo emotional. But that sh*t didn’t work. That motherf*cker, he’s a vault. You look in his eyes you just see nothing but doom.”

Do you think we’re in the midst of a calmer version of Conor McGregor, or will that brash side return in full force for a heated rivalry?