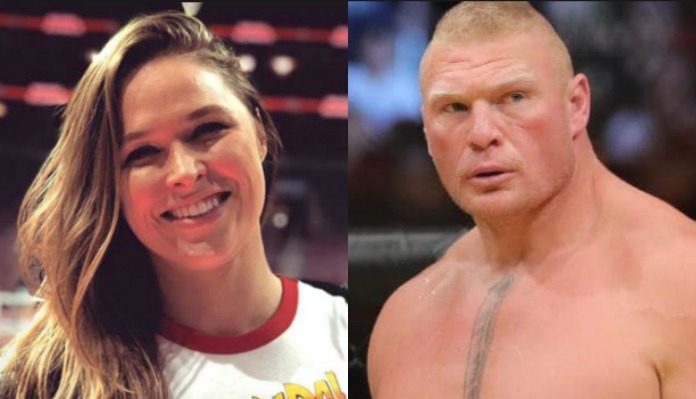 Brock Lesnar and Ronda Rousey have had massive influences in both the UFC and WWE. Speaking on a recent edition of MMA Junkie Radio, WWE Hall of Famer announcer Jim Ross gave his take on the UFC legacies of these two pro wrestling stars.

He started with Ronda Rousey, who he credits with helping turn women’s MMA into a mainstream attraction.

“Ronda ignited an entire division. She put a lot of women on her in that wagon and pulled it,” Ross said of the former UFC bantamweight champion and women’s mixed martial arts trailblazer. “… Ronda brought the attention that (WWE’s female superstars) needed to get them noticed so we could see how great they were. So I believe Ronda pulled the wagon on that entire female division and created an entire division and created an environment to where we want to see more of that led by her. All of sudden we get to WrestleMania this year, and three women close the show – unheard of.”

Next, he gave his take on Brock Lesnar, who previously held the UFC heavyweight title. Ross believes Lesnar had a big impact on the MMA business, although his legacy as a competitor is less solid.

“What Lesnar brought to MMA was headlines, pay-per-view buy rates, but did he contribute to the legacy of the heavyweight division?” Ross said. “Is he going to be known as one of the great heavyweights of all time? Is he going to be a UFC Hall of Famer? I don’t know the answer to those things, but they’re still up in the air somewhat.”

Ronda Rousey has not fought in the UFC since December of 2016, when she was knocked out by Amanda Nunes. Brock Lesnar, meanwhile, last competed in the Octagon in July 2016, when he defeated Mark Hunt, only to have his win overturned when he failed a drug test.

What do you think of Jim Ross’s comments on Brock Lesnar and Ronda Rousey?