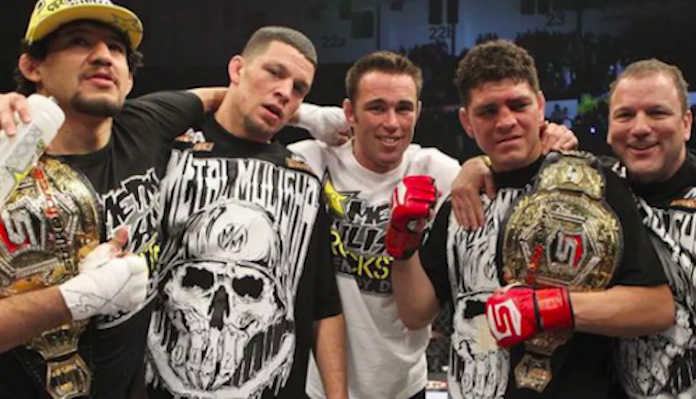 Jake Shields has taken to Twitter to comment on what it would take for Nate Diaz to accept a boxing match with Jake Paul.

Jake Paul has taken to social media several times, calling out Nate Diaz and asking him to meet him in the boxing ring.

Shields (31-9 MMA) has not fought since 2018, but if anyone asks, he will tell them he is not retired yet. However, it is unlikely Shields will step back into the cage for competition purposes – unless the right opportunity should arise.

In an interview with ‘Helen Yee Sports‘ on Twitter, Shields had this to say about a potential boxing match between Diaz and Paul:

“I don’t think he’s earned it (Jake Paul). Not that Nate wouldn’t fight him. Nate by far is the bigger star, more accomplished, has done so much more. So it’s a fight Jake Paul would have to chase and make it worth his while.”

When asked what it would take for Jake Paul to earn a fight with Nate Diaz, Shields had this to say:

“Probably if he wins a couple more boxing matches. Nate obviously needs to be out of his contract as well. And it would have to be a great payday. Imagine.. money talks, you know. If he offers enough money it would be a lot more likely to get interest. He’s not going to fight him for 5 or 10 million.”

“He’s going to have to offer a real payday.”

UFC superstar Nate Diaz (21-13 MMA) has recently publicly requested a release from his exclusive contract with the promotion.

“I would like to request to be released from the (UFC). I apologize for asking online but if you don’t give me a fight (ASAP) I’ve got s— to do.”

In early March, Dana White said there was a ‘very good‘ chance the UFC would sign Diaz to a new deal. White has repeatedly said the promotion intends to book him a fight but to date nothing has been announced let alone confirmed.

Do you agree with Shields that while a Diaz vs Paul match-up is possible, it would require Jake Paul to win a few more boxing matches and offer up a real payday $$$?