It will be fan favorite Nate Diaz (21-13 MMA) entering the Octagon to battle Khamzat Chimaev (11-0 MMA) in the welterweight main event tomorrow night in Las Vegas.

Diaz will be competing in the last fight of his current UFC contract. The 37 year old Stockton native has not fought in the Octagon since June of 2021 at UFC 263 where he went down to defeat against Leon Edwards (20-3 MMA).

Chimaev has 5 consecutive wins in the UFC and 11 overall, with no losses to his resume. The 28 year old last fought in April of this year at UFC 273 where he defeated Gilbert Burns (20-5 MMA) by unanimous decision.

‘The Last Stylebender’ spoke in detail about both Nate Diaz and Khamzat Chimaev before making his official prediction for tomorrow’s battle in the Octagon.

Speaking on his YouTube channel, Israel Adesanya had this to say about Nate Diaz:

“The first time I saw Nate was on TUF season five. He won that season. There’s just so many iconic moments even before the Conor McGregor moment. There’s so many iconic ones. Kurt Pellegrino triangle. F*cking flex, flip the bird. Takanori Gomi, the way he beat him. I think his boxing in that fight just… He always had a wide stance as well. Maybe just to bring himself down to those guys’ level. The way he boxed him up and then guillotined him. That second Gray Maynard fight, that may be my favorite Nate Diaz fight.” 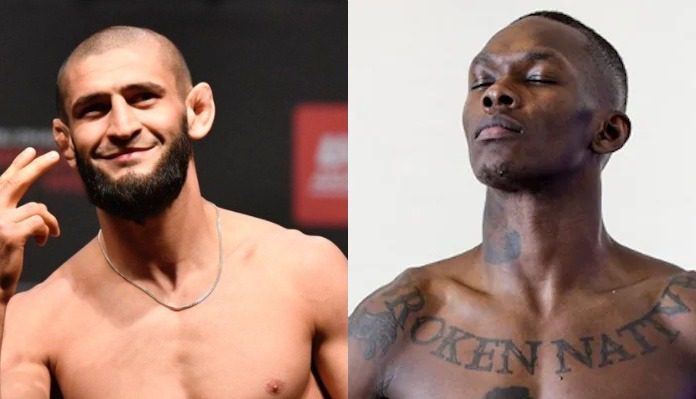 Continuing he spoke about Chimaev, saying:

“The one that made me impressed was the ‘Leech’ fight because Khamzat just mauled him. Picked him up, put him in front of Dana, and then choked him out. Put him to sleep. I never seen anyone do that to ‘Leech’ before. People still doubted him. They were like, ‘Oh yeah, wait till he fights top competition.’ Then he goes to fight Gilbert Burns. Big jump in competition. This is what made me like him.”

Finishing, with his bold prediction for the outcome of Chimaev vs Diaz, Israel Adesanya said:

“If Chimaev’s gonna win, I’m gonna say decision. If Nate’s gonna win, I think he’s gonna finish him later on. It’d be hard to say decision, but I think Chimaev’s going to gas and around the third, fourth, fifth. Third or fourth and Nate just takes over and just TKO’s or submits him. He’s shocked the world before. Conor McGregor, no one expected him to win. Even back then I didn’t expect him to win.”

So there you have it. Although Khamzat is the heavy favorite to win in the betting world, Israel Adesanya has made his prediction – a win for Nate Diaz.

Do you agree with Adesanya that Diaz can ‘shock the world’ again and pull out a win against the undefeated Chimaev?