UFC middleweight champion Israel Adesanya admits he has one thing in common with Jon Jones.

‘The Last Stylebender’ is set to return this Saturday at UFC 281 against Alex Pereira. The two have clashed twice previously in kickboxing, with the Brazilian winning both times. However, both men have stated that this outing will be much different.

Throughout his UFC career, the middleweight champion has gone from a fan favorite to a controversial figure. His timid outings against Jared Cannonier and Yoel Romero saw Adesanya viciously bashed by fans on social media, and in attendance.

In Israel Adesanya’s view, what is happening to him right now isn’t all that uncommon from what happened with other dominant UFC champions. In a recent interview with TMZ Sports, the middleweight champion compared himself to Anderson Silva and Jon Jones.

Like himself, both men had sections of their careers where they had fans against them. In Adesanya’s opinion, sustained greatness can lead to some wanting to see that great fighter lose. The champion believes that he has that in common with other greats of the sport. 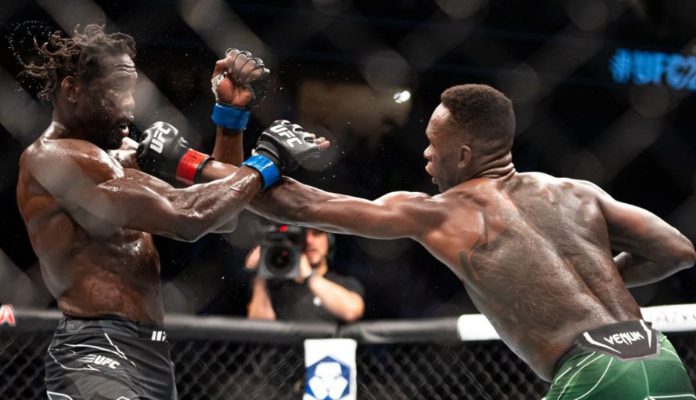 “It’s because you’re great. I’ve said this. It happened to Anderson Silva, it’s happened to GSP — even happened to Jon Jones at one point. Yeah, when you’re as great as I am and you’re on top for so long, they wanna shake the snow globe a little bit,” Adesanya said. “They wanna see, ‘What if he loses? What’s gonna happen?’ (h/t MMA News)

He continued, “I did lose in the Jan fight, and I didn’t give them the reaction that they wanted. They expected me to be like, ‘Ah! No!’ [simulates wrist-cutting gesture] I was just like, ‘Yep, cool, what’s next?’ That’s just me. But yeah, people do want you to lose when you’re as great as I am. Society does that, it builds you up just so it can tear you down. But not today.”

In the past, Israel Adesanya and Jon Jones have gone at it on social media and teased a possible fight. While they absolutely don’t like each other, they appear to have something in common.

This article appeared first on BJPENN.COM
Previous articleIsrael Adesanya explains why his UFC 281 fight against Alex Pereira is “personal”
Next articleAlex Pereira claims Israel Adesanya is being “forced” to face him at UFC 281: “He doesn’t want this fight”
© Newspaper WordPress Theme by TagDiv