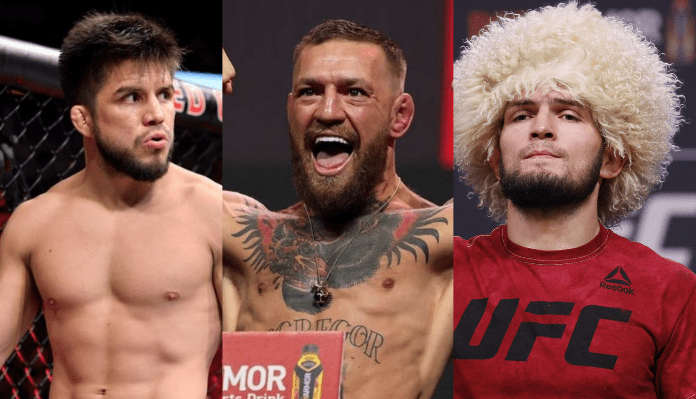 Henry Cejudo believes that Conor McGregor should see what happens if he tried to sucker punch someone like Khabib Nurmagomedov.

McGregor has been back in the headlines this past week for allegedly punching an Italian DJ on a recent visit to Rome. As yet, UFC president Dana White has not shared his full thoughts on the situation. When asked about it during the Contender Series press conference, White said “I honestly don’t know enough about it to comment on it.”

In contrast, Cejudo had plenty to say.

“Like I said, some people just love that adrenaline,” Cejudo told Dave Schmulenson on The Triple C & Schmo Show, “I’m not to say Conor McGregor loves the fact that he can push the envelope but Dana’s not gonna do nothing. That’s the cash cow. He knows the golden rule – the guy with the gold makes the rule. But I will say something,” he added. ”

“If Dana or Conor McGregor is even watching this, you guys stop making us look bad… At the end of the day, we’re just all competitors going out to find an edge to win. But when you’re out there hurting people, putting terrorist attacks on our country and sucker punches these damn DJs, you dirtbag! Pick the right person to sucker punch, man. Sucker punch Khabib, we’ll see how that goes for you,” Cejudo continued. (h/t SportsKeeda)

Aside from doing plenty of media, Cejudo has been vocal in recent weeks about wanting to return to the Octagon. The former Olympic gold medalist retired from the sport after beating Dominick Cruz in 2020. Now looking to make his comeback, ‘Triple C’ has been angling for a fight with featherweight champion Alex Volkanovski.

Cejudo retired as the double champion having won both the flyweight and welterweight titles. If he were to come back and beat Volkanovski then he’d be the first fighter ever to win titles in three different weight classes in the UFC.