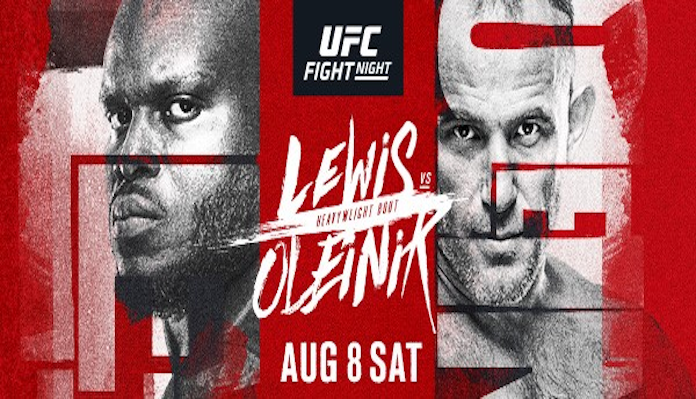 The full betting odds have been released for all 12 fights scheduled to take place this Saturday’s UFC on ESPN+ 32: Lewis vs. Oleinik event.

In the main event, the No. 4 ranked heavyweight Derrick Lewis takes on No. 10 ranked Aleksei Oleinik. Lewis has won two straight fights over Ilir Latifi and Blagoy Ivanov, while Oleinik is coming off of back-to-back wins over Maurice Greene and Fabricio Werdum. Lewis is a knockout artist and Oleinik is a submission master, meaning this is a true two-outcome fight. It should be interesting to see what happens in this fun heavyweight main event.

In the co-main event, former UFC middleweight champion Chris Weidman returns to the Octagon when he takes on the surging No. 11 ranked Omari Akhmedov. Weidman has lost five of his last six fights by knockout, while Akhmedov is unbeaten over his last six fights.

Check out the opening betting odds for UFC on ESPN+ 32 below, courtesy of MMAOddsbreaker.com.

As for the co-main event, Akhmedov opened up as a slight -150 favorite over the former champion Weidman, who opened as a +130 underdog. The betting lines will continue to swing throughout the rest of the week, but bettors can expect it to remain fairly tight.

Who will your money be on this weekend at UFC on ESPN+ 32?