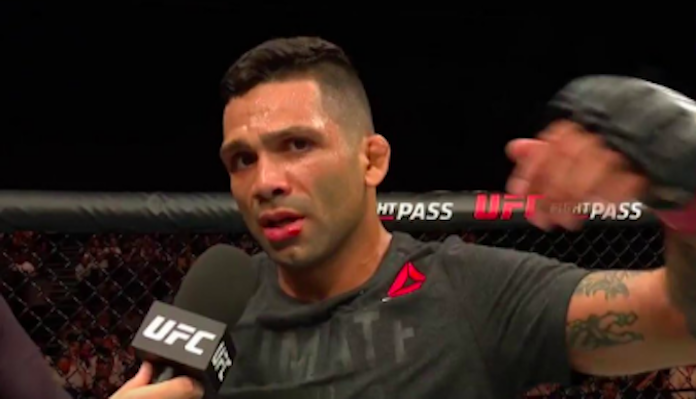 The first matchup for the UFC’s return to Russia has been revealed.

According to a report from Combate’s Ralph Mariano, welterweights Claudio Silva and Ramazan Emeev will meet at UFC on ESPN 5, which takes place August 3 at a TBD venue in Sochi, Russia. Silva vs. Emeev is the first confirmed matchup for the card.

Silva (13-1) is a 36-year-old Brazilian who hasn’t lost since his pro debut way back in 2007. He has since won 13 straight fights, which includes a perfect 4-0 record in the UFC. In his last fight, he pulled off an incredible third-round submission win against Danny Roberts at UFC London. Prior to that, Silva had won fights against Brad Scott, Nordine Taleb and Leon Edwards in the Octagon. The win over Edwards looks excellent in hindsight given how high he’s climbed the welterweight ladder. If Silva were to beat Emeev at UFC Sochi then the UFC should probably give him a top-15 ranked opponent next.

Emeev (18-3) is currently riding a seven-fight win streak including a 3-0 mark in the UFC. The 32-year-old Russian has beaten Sam Alvey, Alberto Mina and Stefan Sekulic in the Octagon so far. He started his UFC career as a middleweight but since then moved down to welterweight and has fared just as well. He is still missing his first finish in the UFC but if he was to get one here over Silva then the UFC would likely be willing to give him a ranked opponent in his next fight.

No betting odds have been released yet for this bout. Given the fact the fight is taking place in Russia, look for Emeev to be a slight favorite in this fight, but you can never count Silva out.

Stay tuned to BJPenn.com for more fight announcements for UFC Sochi as they become available in the coming weeks.