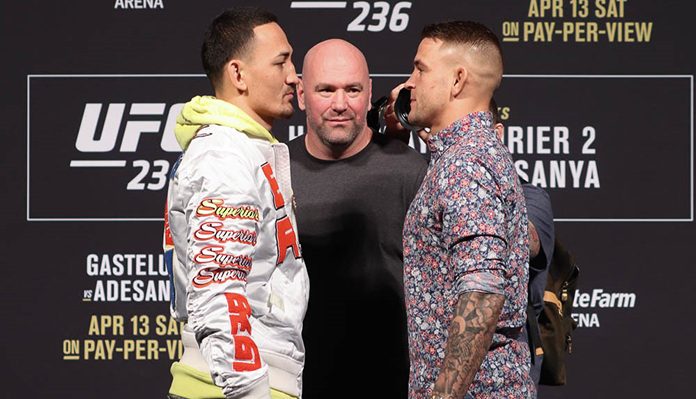 Dustin Poirier is now 2-0 against Max Holloway. He first beat the Hawaiian by submission in the featherweight division years ago, and defeated him again, this time by decision and in the lightweight division, in the main event of UFC 236 on Saturday night.

Despite having a commanding lead in his rivalry with Holloway, Poirier says he is open to fighting the Hawaiian star again.

“My next fight has to be for a unification fight [with Khabib Nurmagomedov],” he told MMAjunkie post-fight. “But I love Max. I’ll fight him five more times.”

Speaking at the UFC 236 post-fight press conference, Dustin Poirier further opened up on his second battle with Max Holloway, explaining that it was just the kind of fight he enjoys.

“One time my mouth was bleeding and I spit, and I spit on him and he said, like he knew that I did it on accident, I didn’t aim at him but it just might have hit him,” Poirier said (via MMA Fighting). “Man, this is a fistfight, you might get some spit on you. When I hit him with a good shot he would say, ‘That was good’ or start clapping.

“When I kneed him in the face, before he started bleeding, when he picked his head up from the knee, I saw the gash and I said, ‘Gotcha.’ It was just — it was a battle.

“He’s kind of tricky. His speed and timing, his cadence that he uses is a little different. He’ll loop shots to the body, throw slow jabs with a fast cross behind it. It keeps you off. A lot of his jabs didn’t land, but the cross did. The guy’s a good striker.

“That’s what fighting is to me,” Poirier concluded. “That’s the purest feeling of fighting to me. I’m hurt, I’m busted up, he’s hurt, he’s busted up, we’re both digging down, who wants it more?

“That grit of fighting is addictive, I’m scared of it. It’s a very weird thing.”

Do you think we’ll see Dustin Poirier and Max Holloway fight again in the future?