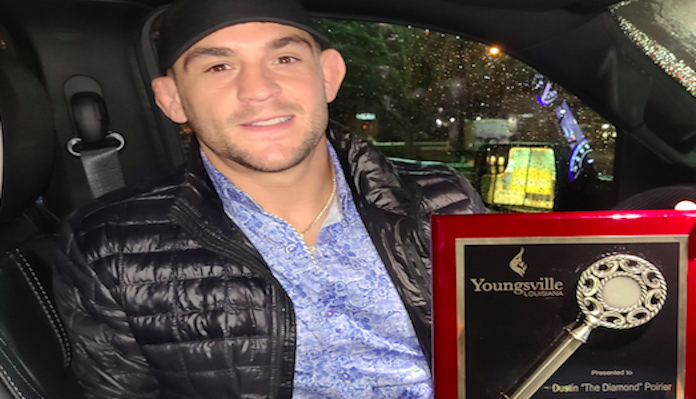 UFC lightweight superstar Dustin Poirier was awarded the “key to the city” by Youngsville, Louisiana, showing fans his award on social media.

Poirier is coming off of an incredible knockout win over Conor McGregor at UFC 257. In addition to being a badass cage fighter, Poirier is also a model citizen outside of the Octagon. Poirier and his wife Jolie run the nonprofit “Good Fight Foundation” which has raised thousands of dollars for the local community and for underserved populations. With Poirier in the lead, the Good Fight Foundation has been able to help better the lives of many people in his local communities.

Poirier was named the first-ever winner of the Forrest Griffin Community Award for his work with the Good Fight Foundation, and now he’s being rewarded again. The city of Youngsville, Louisiana presented “The Diamond” with the “key to the city” and the lightweight superstar shared the photos on his Twitter.

Poirier is currently awaiting his next opponent, but recent reports have pointed to a trilogy matchup with his rival McGregor. It makes sense for Poirier, who hasn’t been a true star in the UFC for that long, to be chasing the biggest financially-lucrative fights that are out there. Another fight against McGregor guarantees him a massive payday as it would undoubtedly be a huge pay-per-view blockbuster, so it’s not a surprise to see reports the UFC wants to book it.

And the thing about Poirier is, with him you know whatever money he makes from the McGregor trilogy won’t just be used for selfish purposes. Poirier is beloved in the MMA community and for a guy who gives back as much as he does, it’s nice to see him finally having this sort of success later in his career.

Who do you want to see Dustin Poirier fight next?