Donald Cerrone will make his return to the lightweight division at January’s UFC on ESPN+ 1 fight card in Brooklyn, New York.

Donald Cerrone (34-11 MMA) will be fighting Alex Hernandez (10-1 MMA) at the promotions inaugural event on ESPN, which takes place January 19 at the Barclays Center.

Cerrone was last seen in action in a welterweight contest against former teammate Mike Perry. “Cowboy” defeated Perry via submission in that bout, which took place at UFC Denver.

After a 6-4 stint at welterweight, Donald Cerrone now returns to 155-pounds for the first time since December of 2015 where he suffered a first-round TKO loss to Rafael dos Anjos in his bid for the lightweight title. 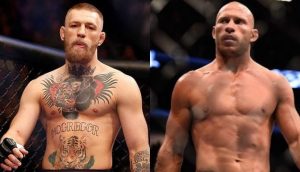 “Cowboy” had been hoping to score a fight with former division champion Conor McGregor for his return to 155-pounds, but clearly the UFC had other intentions.

Donald Cerrone now meets Alex Hernandez, who will be entering the contest on an eight-fight win streak.

Hernandez was last seen in action at July’s UFC on FOX event in Calgary, where he earned a unanimous decision victory over Oliver Aubin-Mercier. Prior to that, Hernandez was coming off a brutal knockout victory over Beneil Dariush.

Check out the current UFC on ESPN+ 1 Fight Card below:

What do you think of the Donald Cerrone vs. Alex Hernandez booking, and who do you think will emerge victorious when the pair collide at UFC on ESPN+ 1 on January 19 in Brooklyn, New York? Sound off in the comments section PENN Nation!