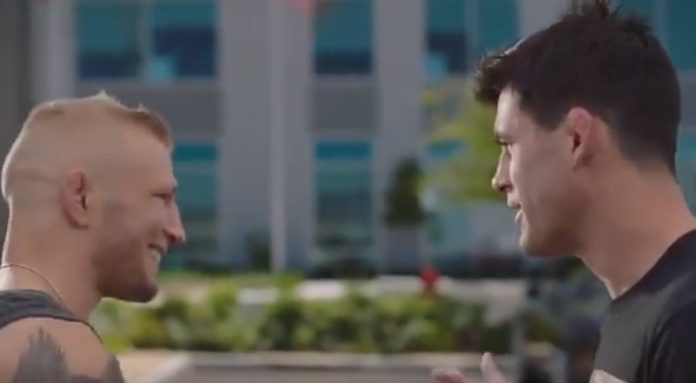 When it comes to the two greatest bantamweight fighters of all time, the two that will come to mind first will surely be former two-time UFC champions, Dominick Cruz and TJ Dillashaw.

The former WEC kingpin, Cruz was, of course, the division’s inaugural UFC champion. Since his Octagon debut in 2011, he would go on to defend the title a total of three times across two reigns. For his second reign, he would earn back the belt that he originally lost due to injury by defeating Dillashaw.

With plenty of great build-up to their bout, the two became fairly bitter rivals as it played into the story of Cruz vs Team Alpha Male. Fast forward three years later, and Dillashaw has since left the Sacramento based gym, won back the title, and most recently… Tested positive for EPO use.

Because of the test failure, Dillashaw has relinquished his bantamweight crown and been given a two-year suspension by USADA. Speaking on the news for the first time since it was revealed, Cruz shared his thoughts.

“I wouldn’t have been surprised if he did or he didn’t test [positive], to be honest,” Cruz said on Ariel Helwani’s MMA Show. “Realistically, I have no attachments to TJ Dillashaw or his decisions. I just don’t. He chose this… I actually feel bad for him. Regardless of what I think, the world believes that there’s an asterisk next to it (his career). Same with Jon Jones. There’s an asterisk next to the story. So at this point, I think he’s gonna come back. Two years really is nothing. I’ve been out longer than that injured. And he’s just gonna get healthy.

“[The suspension time is] being played out as a much bigger picture than it is. If anything it’s a gift.”

If anyone knows what it’s like to be sidelined for long amounts of time, it’s Cruz. When he fought Dillashaw, it was in the midst of a comeback that saw him only fight once in four years after suffering three ACL tears accompanied by a groin tear.

Cruz is currently recovering now from a shoulder tear and he hopes to fight this year. His last fight was at UFC 207 in December 2016 against Cody Garbrandt.