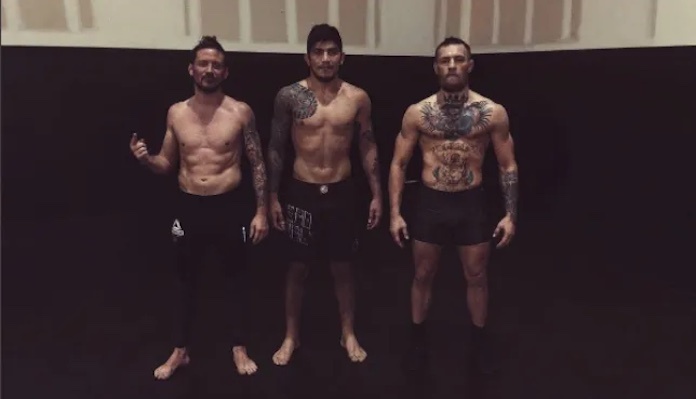 Dillon Danis and John Kavanagh, two of the most important people in Conor McGregor’s inner circle, have reacted to his loss to Dustin Poirier.

McGregor met Poirier in the main event of UFC 257 on Fight Island last Saturday. The pair’s lightweight showdown was a rematch of a 2014 fight that McGregor won by first-round knockout. This time around, Poirier evened the score, ruining McGregor’s lead leg with calf kicks, and stopping him with punches in round two.

It was far from the result McGregor and his team prepared for, but Danis and Kavanagh have been unwavering in their support of the Irish MMA star in the wake of his setback.

“Only those who never stand up, never fall down,” Kavanagh wrote.

Danis, a decorated BJJ black belt who has served as one of McGregor’s key training partners over the last few years, chimed in shortly thereafter.

“Win or learn, I always got your back brother,” Danis wrote on Instagram.

While Danis rose to prominence on the submission grappling circuit, he’s since followed in McGregor’s footsteps and started competing in MMA. He’s now 2-0 as a pro, with both of his victories coming by first-round submission under the Bellator MMA banner.

Since transitioning into MMA, Danis has made no secret of the influence McGregor has had on him.

“He’s a big brother to me,” Danis told the New York Post 2019. “It’s like getting to watch Muhammad Ali every day. He teaches me that the things you say are important.”

“It’s kind of crazy. Being young and getting this popularity, free things and girls everywhere,” Danis added. “You could be 40-0, and no one will know your name. (I’m) 1-0, and everyone knows my name.”

What do you think of Dillon Danis and John Kavanagh’s reactions to Conor McGregor’s loss to Dustin Poirier?