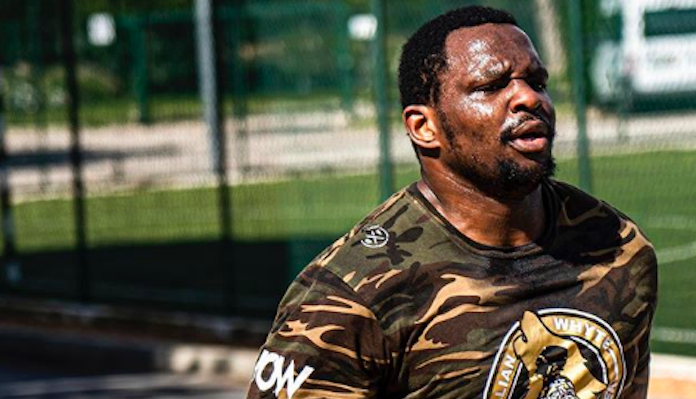 Boxing star Dillian Whyte is ready to make a transition into the UFC and has already called out his first opponent.

The ongoing coronavirus pandemic has spelt disaster for all combat sports, including boxing. The British heavyweight Whyte was scheduled to fight Alexander Povetkin on May 2 in London. His upcoming fight against the Russian has been rescheduled for July 4.

In the meantime, Whyte is considering a switch to the world of MMA. In a video posted on his Youtube Channel, Whyte told UFC president Dana White to hit him up.

He also called out the UFC heavyweight champion Stipe Miocic and threatened to knock him out.

“Ay, I’ll fight Stipe Miocic,” he said. “I’ll kick him in the face. He’ll just try to take me down but he might go to sleep before I go down though.

“Yeah I’ll fight UFC, I’ll do one boxing fight then one UFC. One boxing fight, one MMA fight, tell Dana White to hit me up,” he added.

When asked who his ideal opponent would be, the boxing heavyweight responded by name-dropping Francis Ngannou.

“The only thing they’ll try to take me down, that’s it.”

In a conversation with his team, the British boxer went on to critique Stipe Miocic’s rematch against Daniel Cormier which won him the heavyweight crown in 2019.

For the meantime, Dillian Whyte can hope his upcoming showdown against Povetkin takes place despite the ongoing uncertainty related to the coronavirus pandemic. Do you think Dillian Whyte should make a transition into MMA and fight Francis Ngannou? Let us know in the comments below.