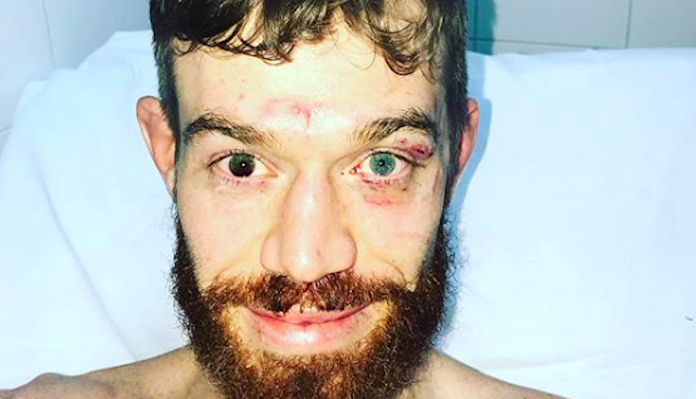 Last Saturday night, on the undercard of UFC Argentina, American lightweight Devin Powell stepped into the cage with Peru’s Jesus Pinedo. In the end, Powell lost this fight by unanimous decision. Apparently, however, this defeat was the least of his worries.

Mid-way through the second round, Powell says he sustained a hematoma inside his eye. This caused his eye to fill up with blood, rendering him temporarily blind in that eye.

Luckily, it doesn’t sound like Devin Powell sustained any long-term damage. That being said, he’s calling this freakish mid-fight injury the scariest thing he’s ever dealt with in a fight.

Here’s how he explains it:

“So that the was scariest injury I’ve had in a fight,” Devin Powell said in an Instagram post detailing his frightening injury. “In the middle of the second round I suffered a hematoma inside my eyeball. My whole right eye filled with blood (as you can see in the photo) making me completely blind in that eye all the way up until I left the hospital that night. No detached retinas, I am always doing a bit better and my foot isn’t broken even though it looks like a giant balloon. I am very frustrated with the outcome, we game planned for someone who comes straight forward very aggressively but I chased him for 15 minutes except for when I was on my back and he wouldn’t engage on the ground. All we can do is get better and find solutions for these stalling points. [UFC] eager for the next one. Let’s go.”

With his UFC Argentina setback against Pineda, Devin Powell returns to the loss column after an impressive first-round stoppage of Álvaro Herrera in August. He’s now 9-4 overall, and as he says in his Instagram post, is eager to get back in there soon.