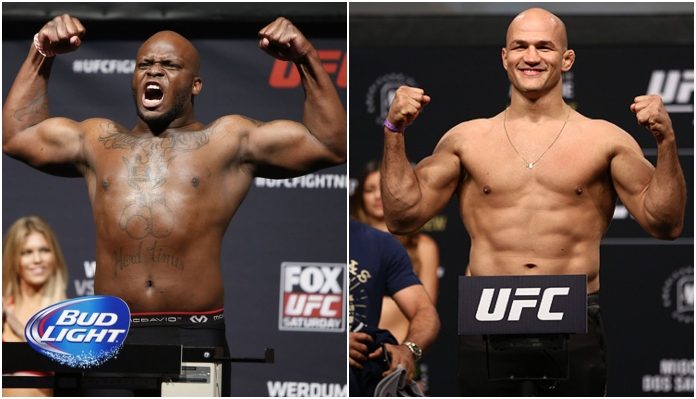 The UFC’s heavyweight division is looking more and more interesting with each and every month that passes. Now, another great matchup is set to go down in early 2019.

On March 9, the UFC’s fourth ESPN+ event will take place in Wichita, Kansas. In the event’s main event, we will be treated to a sure-fire slugfest between the likes of recent title challenger Derrick Lewis (21-6) and former heavyweight champion Junior Dos Santos (20-5), confirms MMAJunkie.

For “Cigano” Dos Santos, his last bout took place in Adelaide, Australia when he headlined opposite the hometown favorite in Tai Tuivasa.

Going into the contest, Junior Dos Santos had alternated wins and losses in his last nine bouts. However, he would snap that pattern and do so in emphatic fashion by TKOing Tuivasa in the second round.

It was a wild 2018 for Lewis to say the least. Having fought four times, Lewis picked up two stellar come from behind knockout wins along with a big yet incredibly lackluster decision nod over Francis Ngannou. The three wins led “The Black Beast” to his first career title shot.

Lewis challenged the then double champ Daniel Cormier for heavyweight supremacy but ultimately wasn’t able to get the job done as Cormier found the second-round submission (rear-naked choke).

With an opponent like Junior Dos Santos, it will be a very safe bet that Lewis will have nothing to worry about when it comes to potentially hitting the mat.

As for the rest of UFC Wichita, the card is still in its infancy but here is currently what’s on tap.