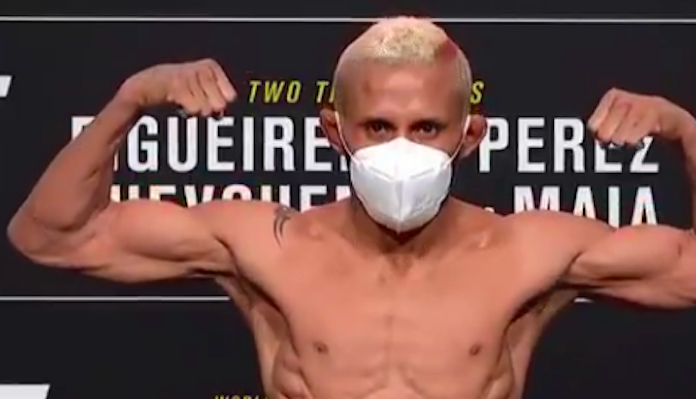 UFC flyweight champion Deiveson Figueiredo has revealed what weight he expects to step into the Octagon at on Saturday night at UFC 256.

Figueiredo is one of the biggest flyweights in the UFC and he has struggled to make the 125lbs mark in the past, most notably missing weight for his first fight against Joseph Benavidez back in February. Figueiredo ended up winning that fight and then took the rematch on Fight Island, this time making weight. He just made weight for his recent title defense against Alex Perez at UFC 255 and he expects to make weight again when he takes on Brandon Moreno at UFC 256 this Saturday night in Las Vegas.

Speaking to the “Helwani Show,” Figueiredo said that he expects to come in on weight at Friday’s weigh-ins at 125lbs, then weight in at 143lbs on Saturday night.

Deiveson Figueiredo says he weighs 143 on fight day. #HelwaniShow (via Jed I. Goodman)

That’s a big flyweight, and Figueiredo’s sheer size, strength, and power compared to the rest of the division are unparalleled. We saw his destructive punching power and in the Joseph Benavidez fights and we know how dangerous his ground game is, too. His own enemy, however, is the scale. Being a big flyweight has its benefits inside the Octagon, but before he even gets in there, Figueiredo has to make weight. The odds are that he will, but the short-notice circumstances could potentially play a factor.

Who do you think wins, Deiveson Figueiredo or Brandon Moreno?