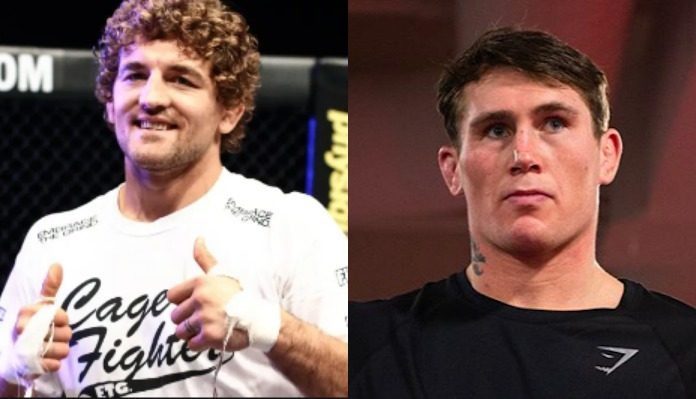 UFC London takes place tomorrow and it’s a card that’s seemingly all about the welterweight as evidenced by the featured attractions.

In the co-main event, Leon ‘Rocky’ Edwards looks to continue ascending up the ranks of the division by taking out Gunnar Nelson.

In the main event, however, Jorge ‘Gamebred’ Masvidal returns to try and snap a two-fight losing streak when he faces off with the also rebounding Darren Till who hasn’t fought since his title loss to Tyron Woodley in September 2018.

But if there is one welterweight who has found their way into the equation, it’s the recently victorious ‘Funky’ Ben Askren who is in town as a guest fighter.

After and forths online prior to week, Till and Askren had a very minor exchange during an Askren Q&A on Friday.

With Askren hoping to fight the winner, whom Till believes will be him, the Liverpool native would speak about his potential future opponent following the Q&A.

“Askren’s fight comes,” Till told MMA Junkie. “But Askren’s been in the UFC five minutes. It’s not about what he wants. It’s about what I want.

“I’m here. I’m No. 3. Seven fights, four main events. I call the shots, not Ben. And the champ will be calling the shots.”

With that said, the Brit hopes that he gets a fight with the new champion Kamaru Usman next rather than the unbeaten Askren.

“I know the champ wants to fight me,” Till said. “I’ve spoken about it with him face-to-face. So all goes well for me on Saurday, I’m praying, and then I’m campaigning for that title shot.”

Will Till get the job done tomorrow against Masvidal?