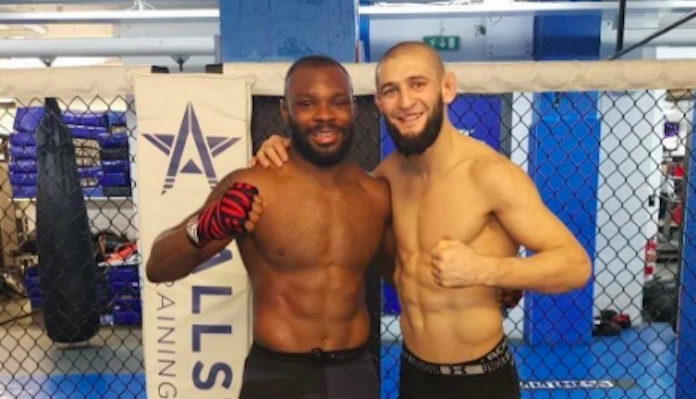 Chimaev was the breakout UFC star of summer, 2020. The Chechen-Swede first picked up two wins in the span of 10 days on Fight Island in July, defeating John Phillips by first-round submission and Rhys McKee by first-round TKO, then picked up his third win of the season when he knocked out Gerald Meerschaert at UFC Vegas 11, also in the first round.

Chimaev has been rewarded for that success with a high-profile matchup with No. 3-ranked UFC welterweight contender Leon Edwards. While many fans feels this fight represents a premature step up in competition, Stewart isn’t so sure about that.

Stewart has trained with Chimaev at AllStars MMA in Sweden previously, and sustained some uncomfortable sounding injuries in the process.

“I know people sit there and say he hasn’t fought certain people,” Stewart said of Chimaev during a recent interview with AbzTalks (via MMA Junkie). “He hasn’t yet. But look here, bro, the guy took a filling out of my tooth, just by cranking my neck.

“He’s so strong, bruv,” Stewart continued. “You could sit there and say, ‘It’s not about strength,’ and this. Brother, he’s so technical and so strong.

“I was grappling with him, and my ear ripped,” Stewart added. “Then he had to come put tape around my head. It was mad.”

“Not like I didn’t give him back nothing. I’m not saying he beat me up. I gave it back to him.”

While Stewart isn’t ready to bet the house on Chimaev beating Edwards, it sounds like that’s the way he expects things to go.

“I’m not saying Leon can’t beat him,” Stewart said. “We haven’t seen him fight people like that. … It’s going to be a good one.

“I’ve seen what he does,” Stewart said. “He’s not a guy to mess with. But in this game, yeah, MMA is MMA, and anything can happen. So I’ve heard from Fabian [Edwards] that Leon is a bad man, and I’ve seen that Khamzat is a bad man, so it’s going to be a good matchup.

“The unfortunate thing is (Chimaev) hasn’t fought no one, but then what do you want him to do? You can only fight who’s in front of you, so yeah, I’m looking forward to that one.”

What do you think of these comments from Darren Stewart? Do you think Khamzat Chimaev is the real deal?