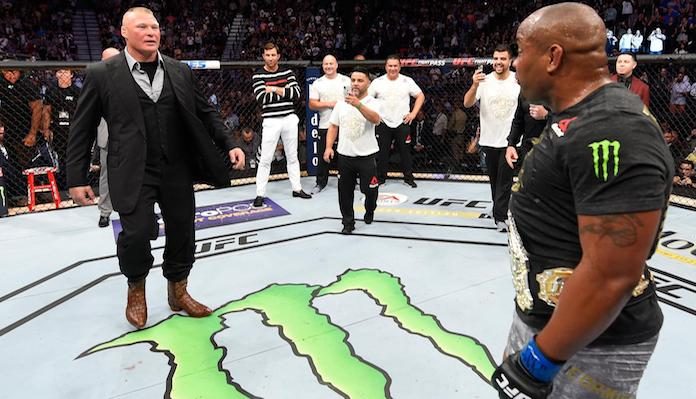 Minutes after Daniel Cormier won the UFC light heavyweight title with a July knockout of Stipe Miocic, he was joined in the cage by former UFC heavyweight champ and long-time WWE star Brock Lesnar. Lesnar then shoved Cormier, causing chaos in the Octagon and adding some serious zest to their potential matchup.

Although Daniel Cormier was then expected to fight Brock Lesnar next, he instead agreed to battle streaking contender Derrick Lewis in the UFC 230 main event on November 3.

According to UFC President Dana White, Brock Lesnar could once again be cage-side for this next Daniel Cormier fight. If he is, it sounds like he might want to think twice about entering the cage with Cormier if the champion retains his title.

Wow. @dc_mma on @BustedOpenRadio with @TheMattCamp & @bullyray5150
"I heard @BrockLesnar will be at The Garden for #UFC230. If he tries to step in that cage again, I'm going to slap him in his face. I owe him one from last time." pic.twitter.com/8LTquSmONH

“I heard Brock Lesnar will be at The Garden for UFC 230,” Daniel Cormier said on SiriusXM’s Busted Open Radio show recently. “If he tries to step in that cage again, I’m going to slap him in his face. I owe him one from last time.”

“That’s my plan,” Lewis joked during an appearance on UFC ON FOX earlier this month. “I’m planning on Eagle-diving on Brock Lesnar. We’ll see.”

If Daniel Cormier retains the UFC heavyweight title in the UFC 230 main event, the expectation is that he will battle Lesnar before his planned retirement in March. That being said, he also recently stated that he might move back down to light heavyweight, where he is still the champion, for a rematch with his arch rival Jon Jones.