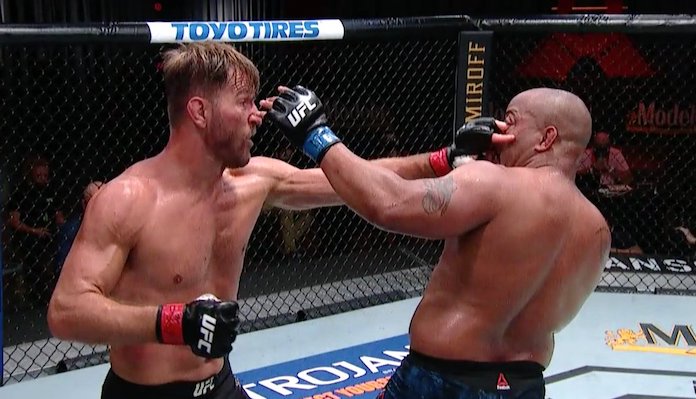 UFC analyst Daniel Cormier shared his thoughts on a redesign of the current UFC gloves, saying that “there’s always gonna be issues.”

Cormier was in the booth during the recent UFC Vegas 21 card, which saw the main event end in controversy when Leon Edwards poked Belal Muhammad in the eye, leaving him unable to compete. The fight was called off by referee Herb Dean on the advice of the cage-side doctor, who declared the bout a “No Contest” due to an accidental eye poke.

In the wake of the Edwards vs. Muhammad fight, the discussion about changing the UFC gloves has come back up. For example, UFC bantamweight champion Aljamain Sterling was among those who spoke up on social media about bringing in a new glove design. According to Cormier, however, even new gloves wouldn’t change the issue of eye pokes.

Speaking to Ariel Helwani on ESPN, Cormier explained why the new gloves with a potential curve design won’t be as effective in curbing eye pokes as some analysts seem to think.

“A lot of times when you poke eyes, you are trying to grab. If your fingers aren’t allowed to open or straighten, I think that you could eliminate some of the eye-poking but the reality is, there’s gonna be issues with the gloves being curved if we go forward. My thing is this, you’re never gonna find something that works perfectly. There’s gonna be issues with everything and I don’t know what it’s gonna take in order to stop eye-poking. I believe eye pokes will still happen, maybe not as frequently but they will still happen,” Cormier said (via MMAFighting.com). “Eye pokes happen just about every fight. The big one that just happened with Belal (Muhammad) — when was the last time a big one like that happened where it was so damaging?”

Cormier himself has been at the center of controversy with eye pokes, most notably during his trilogy with Stipe Miocic, so hearing his thoughts on new gloves is very revealing. And while Cormier might be right that eye pokes are just a part of the sport and we need to live with them, there has to be a better glove out there that will lessen the prevalence of them.

Do you agree with Daniel Cormier about his thoughts on potential new UFC gloves?