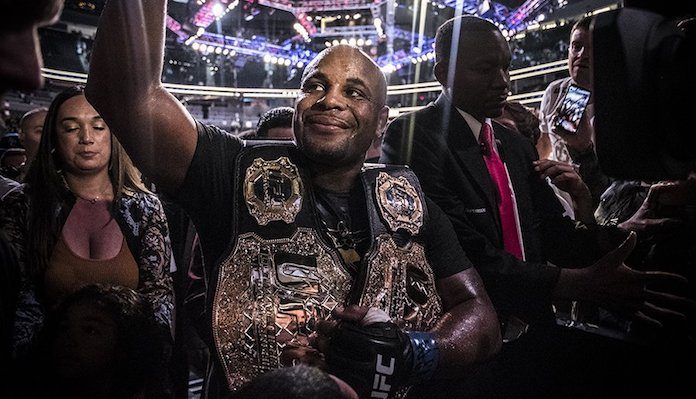 At UFC 232 this Saturday night, the light heavyweight title will be fought over between the likes of the returning pair of rivals, Jon ‘Bones’ Jones and Alexander ‘The Mauler’ Gustafsson.

Since the fight’s announcement, it was always going to be fought over the light heavyweight title that belonged to the champion Daniel Cormier. He would just be stripped of the belt once the fight began.

However, not wanting to go down in the history books as a champion that was stripped of the crown, Cormier has now decided to officially relinquish the title just a day before tomorrow’s fight.

“Today I am going to relinquish the UFC light heavyweight title,” Cormier told ESPN. “I am not going to be stripped of the belt that I’ve defended with my all for three and a half years. Being stripped of a title suggests you’ve done something wrong, and I haven’t.

“I’d rather walk away this way, with my head held high as it always has been, than have the history books say I was stripped. I’ve defended this title this year. I was approached with the idea of fighting at heavyweight, so I took it. I fought three times in 2018. No champion has been more active than me. I am the fighter of the year. My story and my legacy will not include me being stripped of a title. They can have it.”

Daniel Cormier has been the UFC light heavyweight champion since May 2015 when he defeated Anthony ‘Rumble’ Johnson via second-round submission (rear-naked choke) at UFC 187.

Originally the fight was to be the previously mentioned Jones taking on Johnson but due to Jones’ hit and run incident, the UFC stripped him of his title thus leading to Cormier getting the opportunity to fill in.

Interestingly enough, Cormier may have wanted to just stick with the plan to get stripped because now, if the fight between Jones vs Gustafsson ends in either a draw or no contest, it would mean that Cormier would remain the champion. Obviously, that now won’t be the case.