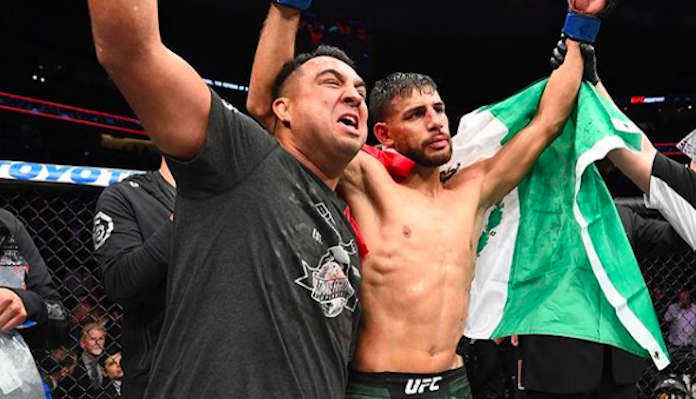 There was a time, not all that long ago, when UFC President Dana White was moving to cut Mexican featherweight contender Yair Rodriguez from the promotion’s roster. Now, he’s crediting Rodriguez with the “craziest knockout ever.”

The knockout in question occurred on Saturday night, in the main event of the UFC’s 25th anniversary show in Denver, when Yair Rodriguez stepped into the cage with fan favorite Korean star Chan Sung Jung — better known as The Korean Zombie.

In the final second of the final round, Rodriguez, decisively down on the score cards, ducked down and planted an upswinging elbow on the chin of his Korean foe. In an instant, The Korean Zombie was out like a light, and Rodriguez had turned the tide irreversibly in his favor.

“Craziest finish ever,” UFC President Dana White told Laura Sanko of this insane Yair Rodriguez knockout on the UFC Denver post-fight show (transcript via MMAjunkie). “There was one second left on the clock when he landed that elbow, and Yair was losing 4-to-1. ‘Zombie’ had the fight in the bag, he had one second to go and, wow, what a finish.”

What was your reaction to the epic, last-second knockout Yair Rodriguez scored at UFC Denver last night? Join the conversation in the comments section below.