Despite the fact that ‘The Eagle’ announced his retirement following his submission victory over Justin Gaethje, the brash UFC boss has remained adamant that Khabib will compete again.

Speaking at the conclusion of this last weeks episode of Contender Series, Dana White was asked whether the upcoming rematch between Conor McGregor and Dustin Poirier could crown a new lightweight champion, due to Nurmagomedov retiring. White responded by insisting that there will be no title on the line in that fight, this because Khabib Nurmagomedov will fight again.

“No, Khabib’s going to fight,” White said (via MMA Junkie). “I believe he’s going to. (McGregor-Poirier is) not for the title.

“I told you guys that I think he’s going to go to 30 (wins),” White added, referencing the fact that Nurmagomedov is still undergoing drug tests as part of the UFC’s partnership with the United States Anti-Doping Agency. “If he’s still testing – why the hell would you want to test still if you’re not going to fight?

“He hasn’t committed, but I feel like he’s going to, and I’m not really pushing him,” White concluded. “We talked about it and he just fought. Let him take some time, spend some time with his family, spend the holidays. There’s no rush.” 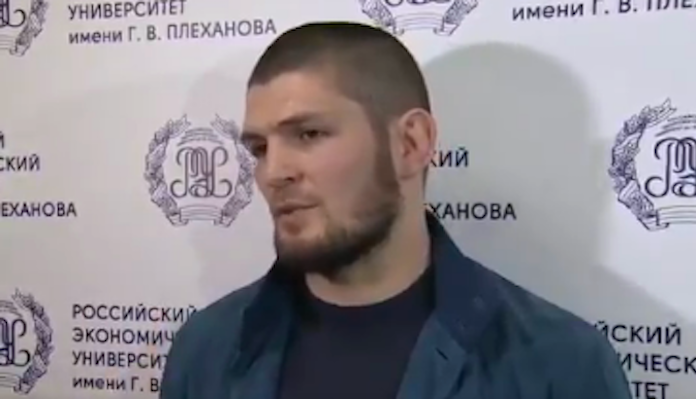 Speaking to TASS.ru this week, Nurmagomedov responded to White’s comments:

“You can fight until you’re 40 but there should be a goal,” Nurmagomedov said (via RT Sport). “I had a goal to reach the summit and I got there. Further, I have no competitive interest. Next year I will graduate. I’d like to [build on] my thesis, do a masters course, dedicate more time to studying. I’ve bought sheep, I tend to my farm. I’d like to develop in this field a little. I have the bull calves out to feed, I have cows.”

“One of those guys will definitely be in for the (Khabib) fight,” White said of future lightweight contests between McGregor vs. Poirier and Oliveira vs. Ferguson.

Interestingly, Dana White did not mention former two-division champion Georges St-Pierre as a potential final opponent for ‘The Eagle’.

Khabib and GSP have expressed their respective interest in fighting one another for some time now, but apparently that fight is not in the promotions plans.

Who would you like to see Khabib Nurmagomedov fight next if he does in fact return to the Octagon as Dana White suggests? Share your thoughts in the comments section PENN Nation!