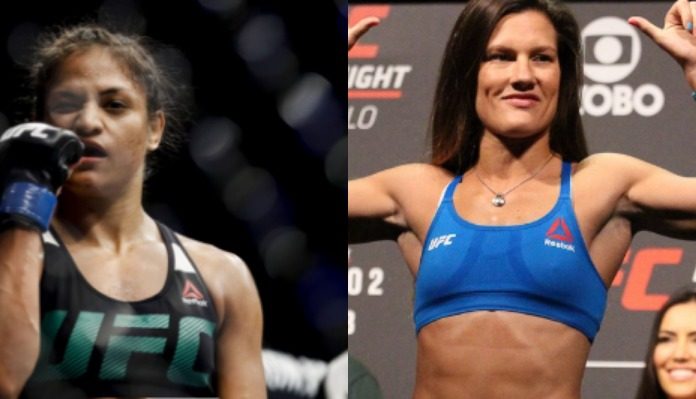 It’s no secret that Cynthia Calvillo likes to stay active with her MMA career and after losing out on some fight time due to a suspension, she’s ready to make up for the time that’s been lost.

Calvillo made her professional debut in August 2016…she’s amassed a record of 7-1 since then and five of those fights came in 2017 (four in the UFC).

At the end of 2017 for UFC 219, Calvillo would suffer the first defeat of her career to former champion Carla Esparza before being dealt a suspension by USADA for marijuana use.

Now after successfully returning by dispatching of fellow top prospect Poliana Botelho with a first round submission (rear-naked-choke) at UFC Argentina, she’s got her next fight lined up.

Cynthia Calvillo will be headed to Anaheim, California for UFC 233 on Jamuary 26 to take on these always game No. 10 ranked contender, “Cast Iron” Cortney Casey (8-6), confirms OCRegister.

Casey last fought at UFC Lincoln when she snapped a two-fight losing streak by earning the split decision nod over former Invicta FC champion and The Ultimate Fighter season 20 cast member, Angela “Overkill” Hill. Her loss prior to the win also came in fights that ended with split decisions when she took on Felice Herrig and Michelle Waterson.

Stylistically, this is just another awesome matchup that keeps on stacking up the fantastic first pay-per-view event of 2019 for the UFC which is UFC 233. Check out what else is currently on tap (not all bouts listed have been made official).