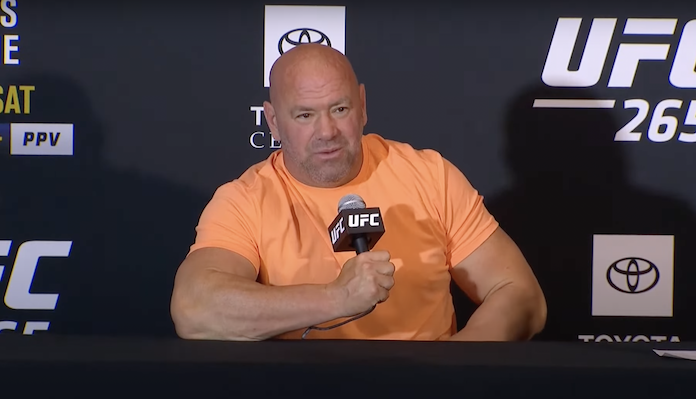 Cris Cyborg believes Dana White may have been seeking attention regarding the Nelk Boys payment controversy.

Just a matter of weeks ago, Dana White made the headlines once again after gifting Kyle Forgeard – a member of the Nelk Boys – with $250,000 for his birthday. While some found the move admirable, others couldn’t believe he was giving out that kind of money when you consider how much his fighters get paid by comparison.

Fighter pay is a known problem in the UFC and pundits continue to beat the drum about it, even outside the promotion.

Cris Cyborg, who has had her fair share of issues with Dana White over the years, gave her thoughts on the matter during a recent interview with James Lynch.

“Hey, how sweet gift it is… He [Dana White] has money, he’s had a lot of money, so he does whatever he wants… But, I believe, if you don’t want any attention, you send on Bitcoin… For sure it’s for attention, for social media and the people who ask like me… Probably a lot of fighters are maybe upset because they know how much they make fighting, working hard, training 10 weeks straight, losing weight, and they see the money they make.”

Cyborg is currently a champion over in Bellator where she seems to be pretty happy with what she’s making. In comparison, she never seemed to be overly pleased with her tenure in the UFC – although it’s not known how much of that was due to personal differences and how much of it was down to pay.

What do you think of the Dana White & Nelk Boys controversy? Is this a move that could come back to haunt him in the future or not? Let us know your thoughts down in the comments, BJPENN Nation!