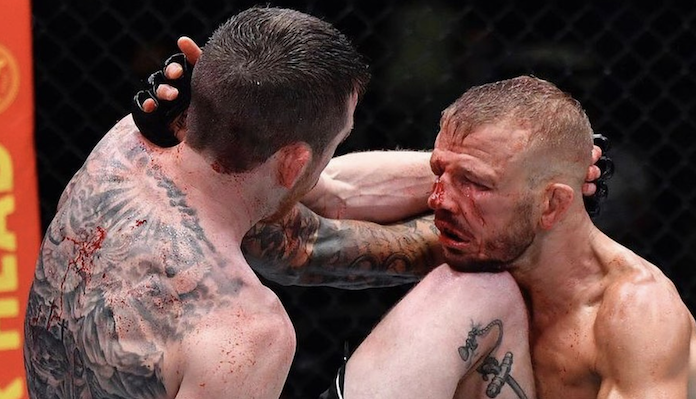 UFC bantamweight Cory Sandhagen admitted that his recent split decision loss to TJ Dillashaw was a “coin toss” on the judges’ scorecards.

Sandhagen and Dillashaw fought tooth and nail for 25 hard minutes, but at the end of the five rounds, the judges awarded Dillashaw with the split decision nod. It was a very close fight that could have gone either way, as many of the rounds were decided by razor-thin margins. In the end, the judges sided with Dillashaw and Sandhagen has a loss on his record, though he has already said the UFC matchmakers aren’t going to punish him for it.

Taking to his social media the day after the fight, Sandhagen gave his thoughts on the decision. As far as “The Sandman” goes, it was very close and he admits it was a toss-up.

Cory Sandhagen: My thoughts on the fight, as I’m sure some of you are curious: I believe I should have done more to win. I made a few mistakes that gave him a nod from the judges. I kept myself protected and defended almost all the shots while scoring the harder and cleaner ones. He was able to control against cage for longer, while not doing any damage.. up to you if you score that as winning. I will give credit to TJ for fighting tough. It was a coin toss. If it’s damage, I win. If it’s control, he wins. So it goes.. thanks for the support from everyone.. gonna keep climbing

Regardless of the fact he lost the decision on the judges’ scorecards, it is clear from his performance that Sandhagen is still one of the best bantamweights in the world. For his next fight, look for the UFC to match him up with someone else ranked in the top-five.

How did you score the Cory Sandhagen vs. TJ Dillashaw fight at UFC Vegas 32?