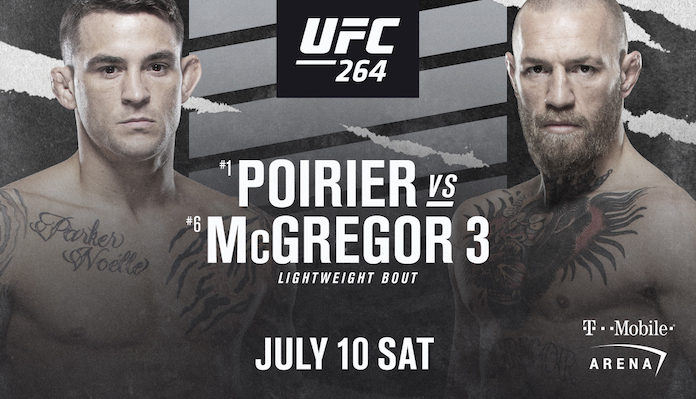 The UFC has released the Conor McGregor vs. Dustin Poirier 3 hype video and it uses a quote from the famous “The Man in the Arena” speech.

McGregor and Poirier meet for the third, and presumably the final time at UFC 264, which takes place on July 10 at T-Mobile Arena in Las Vegas, Nevada. For McGregor and Poirier both, this is absolutely a must-win fight after both men split the first two fights between the pair. McGregor won the first meeting between the two rivals back at UFC 178 in September 2014 when he knocked Poirier out in the first round in a featherweight fight. Poirier then returned the favor at UFC 257 earlier this year at 155lbs when he stopped McGregor in the second round with punches after compromising his legs with calf kicks.

With UFC 264 just around the corner, the promotion has released a hype video for the upcoming megafight. In the video, Poirier narrates Theodore Roosevelt’s speech from 1910 while footage of his previous fights with McGregor plays in the video. Check it out below.

The trilogy fight between McGregor and Poirier is expected to be one of the biggest blockbuster fights for the UFC all year, if not all time. Both McGregor and Poirier are two of the most accomplished fighters on the UFC roster and both men have a long and bitter rival with each other. The first two fights between these two men produced two incredible knockout victories, so there is certainly the chance that the third fight does the very same. Expect McGregor and Poirier to put on a show for the fans next weekend at UFC 264 in Las Vegas as they both enter the Octagon, but with only one man emerging as the winner.

How excited are you for the trilogy fight between Conor McGregor and Dustin Poirier?