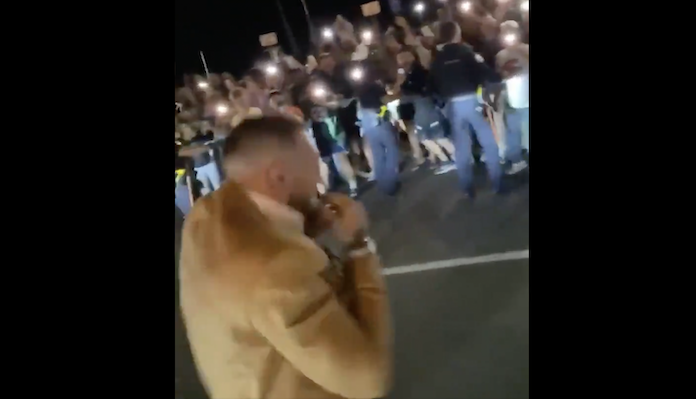 UFC lightweight superstar Conor McGregor shadowboxed for a mob of fight fans ahead of his UFC 264 trilogy fight against rival Dustin Poirier.

McGregor was leaving dinner on Saturday night when a massive group of fans surrounded the restaurant he was eating at. With security guards keeping the fans at bay, McGregor gave them a taste of what they can expect next Saturday night at UFC 264 as he shadowboxed for the mob of fans ahead of his trilogy matchup next weekend with Poirier. Check out the video of “Notorious” giving fans a glimpse of what they can look forward to.

One week out from his #UFC264 fight, Conor McGregor was greeted by a sea of fans after leaving dinner on Saturday night

As you can tell from this video, fans are getting stoked to watch one of the most popular fighters of all time get back into the Octagon. Anytime McGregor fights, it’s always a massive deal as he brings a lot of excitement to his performances. Against Poirier, McGregor has so much on the line because their all-time series is tied at 1-1 and the winner of this fight next Saturday will officially win the trilogy. As well, the winner of this matchup seems likely to be the next to fight UFC lightweight champion Charles Oliveira.

For McGregor, he is looking to get back into the win column for the first time since a knockout win over Donald Cerrone in January 2020. Since then, McGregor has only fought once, losing to Poirier in the rematch at UFC 257 earlier this year. The trilogy fight between these two will be for all the marbles. With so much riding on the line, fans can expect nothing short of a fantastic battle between these two heated rivals.

How excited are you for the trilogy fight between Conor McGregor and Dustin Poirier?