Nobody really knows what’s going to happen when Conor McGregor steps back inside the Octagon for the first time since UFC 229, but one thing is for sure: the Irishman is using that loss is Las Vegas as fuel for the fire.

McGregor was beaten on that night by rival Khabib Nurmagomedov who won via submission to retain the UFC Lightweight Championship. While McGregor’s comeback fight against Donald “Cowboy” Cerrone may be taking place at welterweight, there’s no denying the fact that a rematch with Nurmagomedov is on the mind of both McGregor and the UFC.

During a recent addition to his Instagram story, McGregor made sure that nobody forgets what his eventual end goal is in this game: gaining a measure of revenge. 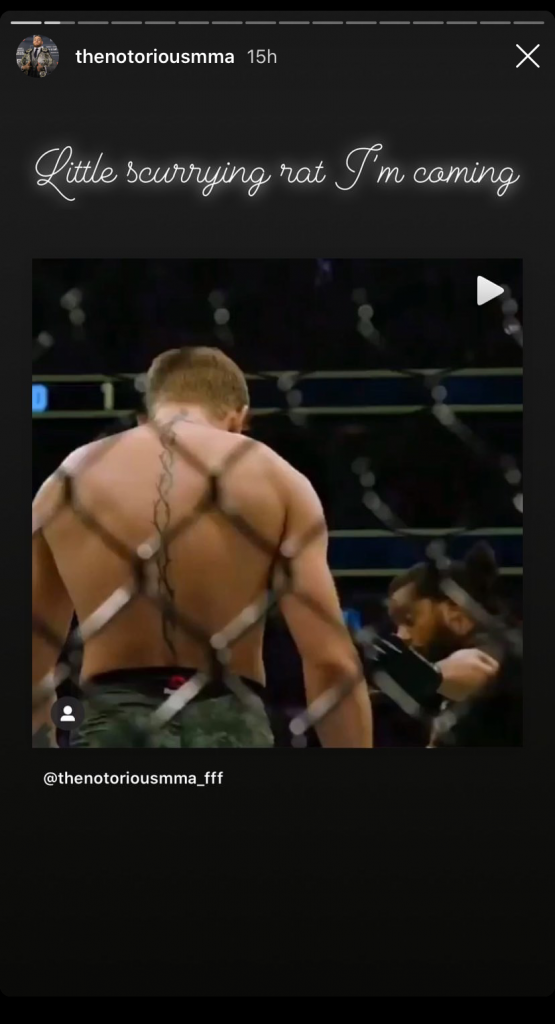 The message in question has now disappeared, but for reference, it includes a clip of McGregor during his fight with Nurmagomedov with the following caption:

The three-stage plan that was laid out by McGregor a few months back would seem to indicate that the wants to fight Donald Cerrone in January, then Jorge Masvidal after he was able to defeat Nate Diaz for the “BMF” Championship, and then finally Khabib Nurmagomedov – with all three fights taking place in 2020.

It certainly seems like an insanely tall order for McGregor to be able to get the job done, but we all know him to be one of the most determined men in combat sports, meaning that writing him off could prove to be a big mistake.

Nurmagomedov is going to have his hands full when he defends his Lightweight Championship against Tony Ferguson in April, ensuring that there are still quite a few obstacles in the way of us getting to see the highly anticipated rematch between these two European superstars.

Do you think Conor McGregor and Khabib Nurmagomedov will rematch in the future?