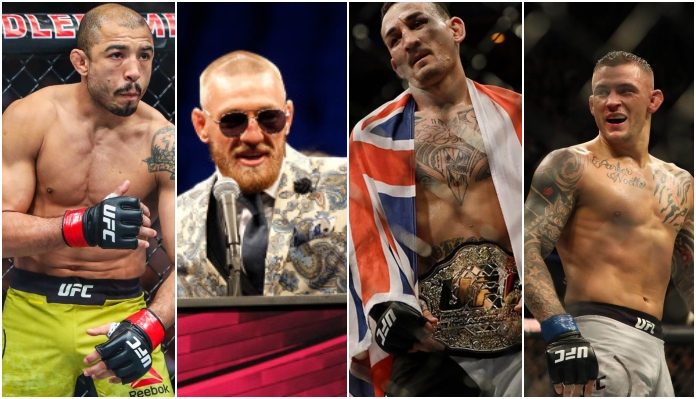 Conor McGregor is looking for a fight and some previous opponents come to mind as a potential next opponent.

During his Q&A session in Chicago, while discussing former opponents, McGregor acknowledged the work that Dustin Poirier, Max Holloway, and Jose Aldo have all done since they suffered losses to ‘The Notorious’ and he believes they deserve rematches.

As he spoke about there being in his fight against Khabib Nurmagomedov and that dispute is why a rematch must happen between the two, McGregor would say that Poirier, Holloway, and Aldo have all worked themselves back up and deserve rematches as well.

“On the other side, if you beat a man convincingly, a first-round KO, a dominating performance, there’s not really a need for a rematch,” McGregor stated. “But, if that individual rises up the ranks, if he goes back, checks himself, humbles himself, stays focused, stays positive, and rises up exactly like Dustin Poirier has done, and exactly like Max Holloway has done, well then there is rematches deserved.”

In addition to rematches with Poirier and Holloway who are scheduled to face each other at UFC 236 for the interim lightweight title, McGregor spoke about a potential rematch with the former featherweight champion in Aldo.

Although McGregor defeated Aldo in just 13 seconds at UFC 194 in December 2015, he believes Aldo has risen back up and deserves a rematch, even saying he thought about fighting Aldo at UFC 237 which is scheduled to take place in Brazil on May 11.

“Even Aldo now currently, he had a great win, his last two wins were great wins,” He said. “He had a little bit of a slip, but he’s had two great wins and now he’s fighting in his hometown of Rio De Janeiro. I actually was thinking I might slide in and face him, but all these politics and co-main event conversation kind of halted that as well. If he wins, I believe he’s up in line for a rematch also. Although it was a 12-second knockout, I still think if you rise up again, you deserve a rematch. So, this is where we are at.”

During the session with fans, McGregor spoke about rematches with Khabib Nurmagomedov, Floyd Mayweather, and took aim at Joe Rogan’s commentary while also stating he wants shares in the UFC if he fought in the co-main event slot.

McGregor seems to be in business looking for fights with opponents that many fans have been calling for and all three of his past opponents Poirier, Holloway, and Aldo have been vocal about getting a rematch with him as well.