Colby Covington has shown off his new King of Miami belt after beating Jorge Masvidal at UFC 272.

In the lead-up to his welterweight grudge match against Masvidal at UFC 272, he said they were fighting for the title of ‘King of Miami’. After he dominated ‘Gamebred’ from bell to bell and won a clear-cut decision he revealed he was getting a King of Miami belt which has now arrived.

“I might have got sent a belt. It’s title season over here boys. It was a big fight for Miami. You guys got to tune in you know,” Covington said to Submission Radio. “This was something bigger. It was the King of Miami title fight, it was the big one. Stay tuned for the coronation. I promise you. There’s pics to follow this weekend, it’s going to be a great celebration in history… Yeah, it’s gotta be a part of fight week. It’s an important part of fight week. It’s the most prestigious title in the UFC today. To retain that belt, whoever gets to hold that belt, its the biggest piece of 20 lbs of gold that you’ve ever seen. It’s just a beautiful immaculate piece. So the fact that you even get to fight for it, is the biggest honor and the biggest moment you’re ever going to get in your entire life.”

Now, Colby Covington was seen partying with the Nelk Boys over the weekend and the YouTuber posted a pic with ‘Chaos’ showing off the belt. The title has a blue sky and palm trees with the text ‘King of Miami’ on it. 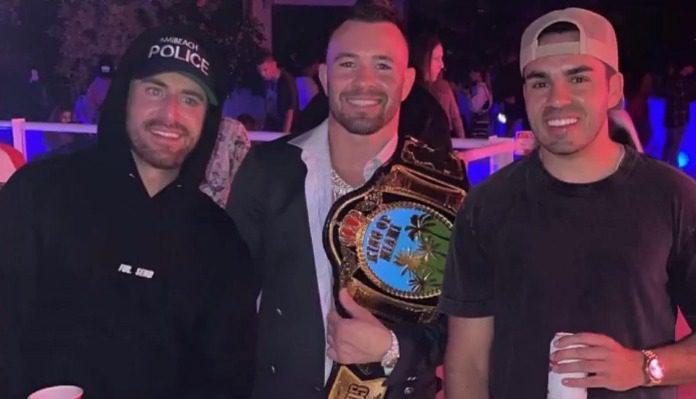 Who made the King of Miami belt is uncertain but Colby Covington has it in his possession and it’s likely he will bring it around to the upcoming fight weeks after he beat Jorge Masvidal at UFC 272.

With the win over Masvidal, Covington improved to 17-3 overall and is 12-3 inside the Octagon.

What do you make of Colby Covington’s King of Miami belt?