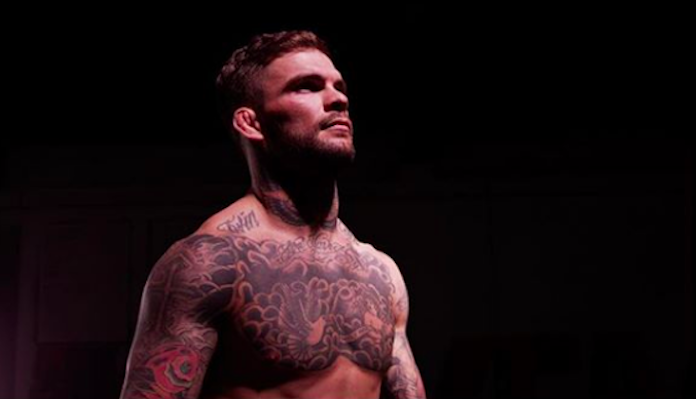 Former UFC champion Cody Garbrandt is set to return after his long battle with COVID-19. For his next time out, he’ll be back in the main event.

ESPN’s Brett Okamoto broke the news Thursday that Garbrandt will remain at bantamweight. This is after he was previously looking to make the move to 125-pounds in pursuit of Deiveson Figueiredo’s flyweight crown. Now, he draws Rob Font on May 22 as the UFC fight night event’s headliner. The location has yet to be determined.

Per sources, Cody Garbrandt (@Cody_Nolove) vs. Rob Font (@RobSFont). May 22. Five rounds. Main event. Sick fight … Who you got? pic.twitter.com/mAWt96o1jk

The last time we saw Cody Garbrandt in action he picked up a critical victory that saw him snap his rough three-fight skid. Taking on perennial top contender, Raphael Assuncao at UFC 250, Garbrandt scored a knockout of the year contender when he landed a monstrous right hand at the sound of the horn in round two. 10 of Garbrandt’s 12 professional victories have come by way of knockout.

From there, COVID-19 complications left “No Love” out for an extended period of time. Meanwhile, Massachusetts’ Font has risen to prominence in the 135-pound weight class.

Coincidentally, Font is the last man Assuncao defeated and that also happens to be his last loss. Since then, the 33-year old has been perfect with three very solid wins over the likes of Ricky Simon in a fight of the night performance, the next Bellator title challenger Sergio Pettis, and former WSOF champ and UFC title challenger, Marlon Moraes.

Font’s most recent victory was his December clash with Moraes where the striker managed to put away the Brazilian in the very first round and earned him an extra $50,000. For Font, this will be his first UFC main event whereas for Cody Garbrandt it will be his third.